The Buds of Spring

For those of us living in the temperate zones of planet Earth, there is probably no season more loved than spring. After months of dark and cold, rain and snow, the warm sun is like a caress on the skin and the new life bursting forth all around us touches the heart.

And there is perhaps nothing more emblematic of early spring than the opening of buds. While the colors of the winter months are mostly muted, spring brings fresh greens, pinks, yellows, and soon the full, vibrant palette of freshly emerged flowers. Where do all those fresh leaves and brilliant flowers come from? The buds.

The opening of buds raises a whole series of questions for the curious biologist:

Nature invites us to ask her an unending stream of questions! We will approach a couple of them here.

THE BUDS OF SPRING

First, let’s enjoy some of the beauty that surrounds us in spring. Pictured below are some buds on a huge magnolia (Magnolia sp., Family Magnoliaceae) that grows in a friend’s back yard in Seattle. You can see both the enormous flower buds that are in the process of opening and the much smaller, pale green, leaf buds that will open later. 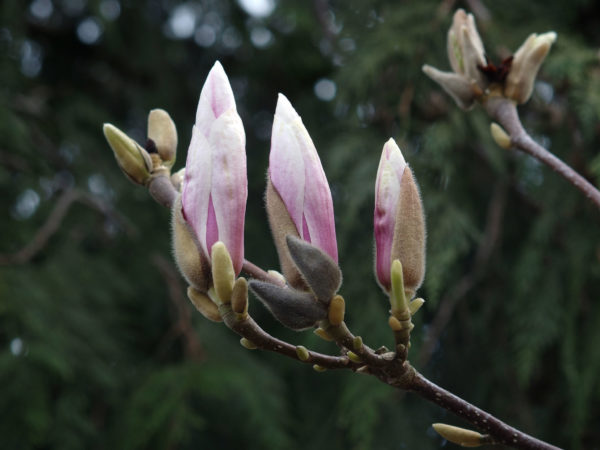 And here, from the same tree, is a flower well on its way to full exuberance and its biological function of reproduction. 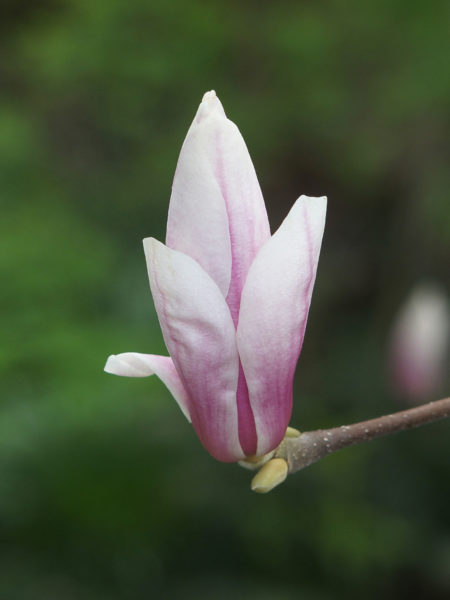 In a magnolia there is just one flower encased in each bud. In some species, however, there are many, as in this big leaf maple (Acer macrophyllum, Family Aceraceae) on Whidbey Island in Puget Sound. 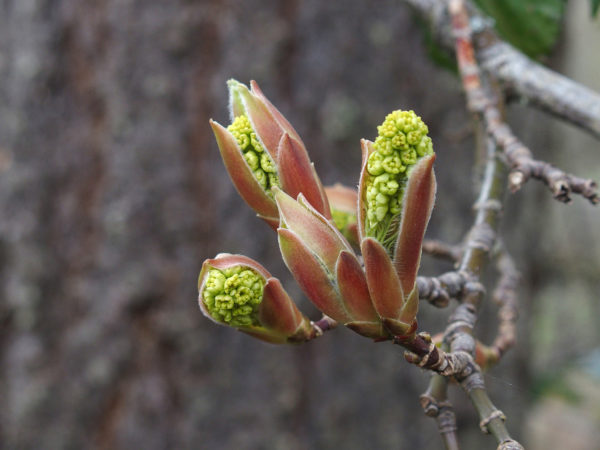 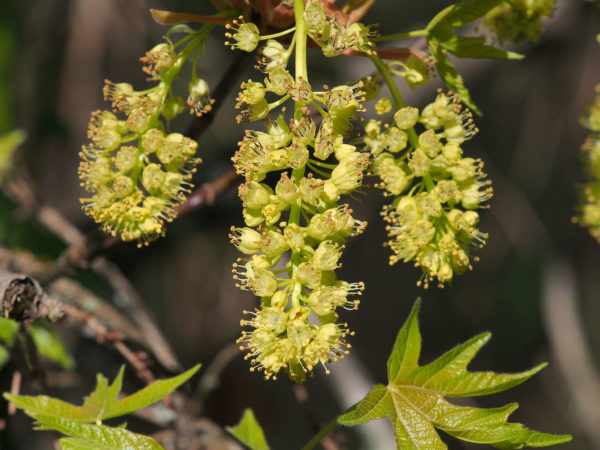 WHEN DO BUDS FORM?

We already have a partial answer to the question, when do buds form? In the post Trees through the Seasons, we saw that the buds of alders (Alnus rubra, Family Betulaceae) were fully formed in the fall, even while the leaves were still on the branches. So, by the time these buds opened in March or April, they had been in place for at least six months.

Below is another example. The upper photograph shows the terminal buds on a branch of a sugar maple (Acer saccharum, Family Sapindaceae) in Minnesota, taken in October of 2017.  There is a conspicuous, large terminal bud enclosed in its graceful scales and two tiny axillary buds tucked in alongside. The lower photograph shows similar buds photographed in April of 2018. There is only one real difference: the yellow leaf stalks that are so conspicuous in the upper (October) picture are gone in the lower (April) one, and all that remains in their place are the leaf scars. The buds themselves, however, are virtually identical, and again have remained fully formed but unopened for at least six months. They have been in a state of dormancy. 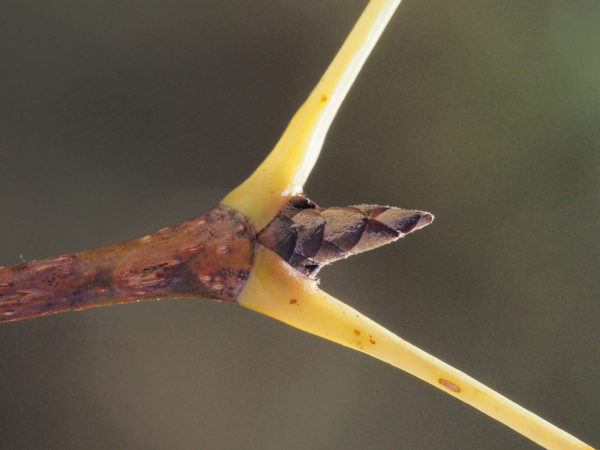 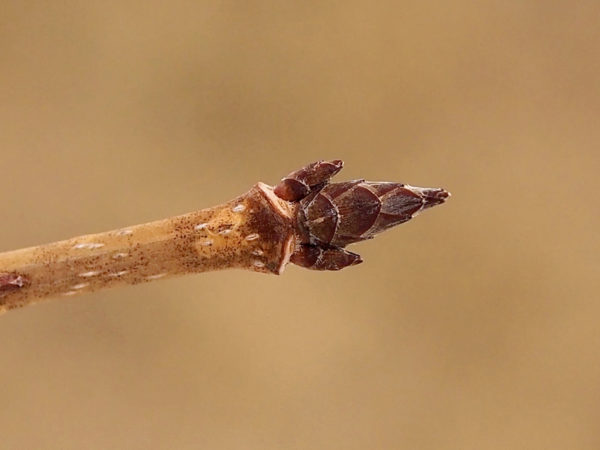 But wait a moment! In October we saw buds that were fully formed. That means they started to develop before that time. Buds generally become visible during the summer, and with the aid of a microscope the cells that will give rise to the buds of autumn can often be identified even earlier.

The behaviors of buds–entry into dormancy, emergence from dormancy, and many others–are influenced by hormones.  We can illustrate this point by way of the phenomenon of apical dominance. Gardeners know that you can induce your trees and shrubs to branch more profusely by cutting or pinching off the terminal buds and thereby releasing the buds below them from inhibition. The photograph below shows a young sugar maple branch that illustrates apical dominance–the leaves of the terminal bud are expanding, but the third pair of buds from the tip looks like it will not open, and the leaf scar in the lower left of the picture does not even cradle the bud that we would expect to find there. 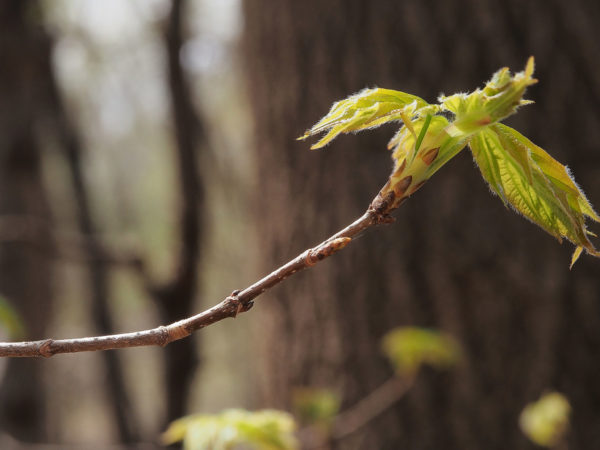 Inasmuch as axillary buds are inhibited at some distance from the apical bud, biologists long ago hypothesized that the inhibitory influence is mediated by a hormone. A search of many years revealed that the hormone in question is auxin. We have encountered auxin twice before: in the context of shoots maintaining upright growth in the face of being reoriented in the field of gravity, and in the control of leaf fall (abscission).

If cutting off the tip of a shoot frees the axillary buds below it from inhibition because the source of auxin is removed, then auxin from an outside source placed on the cut should restore the inhibitory effect. This proves to be the case. When a dab of auxin mixed into some lanolin paste is smeared on the cut, the buds lower down on the branch fail to open. They are inhibited just as they would have been had the terminal bud remained in place. This classic experiment is a compelling test of the auxin hypothesis. For this and many other reasons the auxin hypothesis for apical dominance remains widely accepted, albeit with numerous additions.

LINKING BUD BEHAVIOR TO THE SEASONS

As we have seen in previous posts, the lives of plants are tied to the seasons. This means they must be able to sense the seasons in some way and to translate that information into their behavior. Let’s consider just two of the important signals that plants use to come into alignment with the cycle of the seasons, particularly during the transitions of fall and spring.

Temperature. Temperature in our latitudes cycles between the heat of summer and the cold of winter, so temperature can be a useful signal for plants. Temperature, however, fluctuates substantially from day to day, as well as from year to year. Therefore, temperature alone would not be a reliable signal for the initiation of dormancy, bud break, or any other aspect of plant behavior.

Photoperiod. By this we mean the relative length of day and night, which changes in a systematic way through the year (think of the solstices and the equinoxes). Surprisingly, it is actually the duration of the dark (not the light) that usually governs plant behavior.

Inducing and breaking winter dormancy. How do temperature and photoperiod combine to guide buds into and out of dormancy? Here is a highly simplified version of the story.

The cues for initiating winter dormancy include both longer nights and lower temperatures. A hormone, abscissic acid, plays a role in linking long nights to the quiescent metabolic state that constitutes dormancy.

The cues for breaking dormancy include both shorter nights and higher temperatures, though in this case the higher temperatures appear to play the greater role. In addition, many plants will not break winter dormancy unless they have been exposed to a sufficiently long series of low temperatures, a phenomenon known as vernalization (getting ready for spring). This requirement makes it less likely that an early, short warming period will prompt buds to open, only to be damaged or killed by the return of the cold.

In order for temperature to serve as one of the cues for bud behavior, the plant must be able to measure temperature (it must have some sort of biological thermometer) and to translate this information into growth commands.

In order to use photoperiod to guide its development, a plant has to be able to detect light and to measure time. As with temperature, the plant must also translate this information into growth commands.

We will look at the actual mechanisms for sensing important environmental cues in another post. For the moment, suffice it to say that sensing light requires a pigment, and the pigment that plays a role in measuring day length is different from any we have encountered on Nature’s Depths heretofore. Plus, sensing time requires a clock. What sort of clock might exist within a plant? Just a little teaser for the future!

VARIATIONS ON A THEME

If you look carefully at the photographs of the big leaf maples (Acer macrophyllum) near the beginning of this post, you will see that by the time the flowers are mature, at least some leaves have appeared as well. Thus, in this species, flower buds and leaf buds open close together. The photograph of the sugar maple (Acer saccharum) buds opening shows a different situation. There the leaf buds are opening but the flower buds are not. Silver maples (Acer saccharinum) are different still. Below are photographs of their male flowers (above), characterized by white stamens and anthers, and of their female flowers (below), recognized by bright red styles and stigmas. The associated leaf buds seen in these photographs are still tightly closed. There is not a leaf to be seen anywhere, neither near the flowers nor anywhere else on the tree. Three species, three sequences. 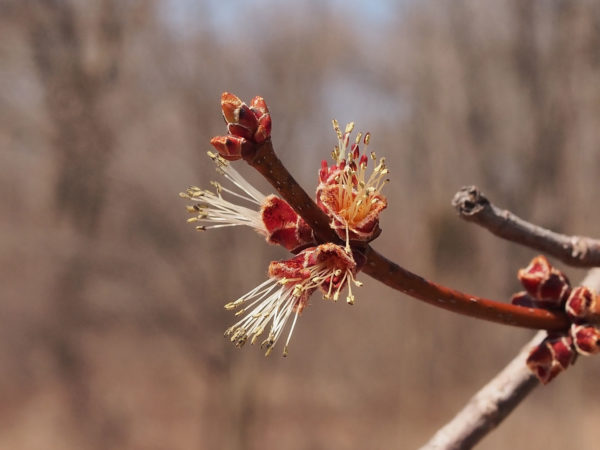 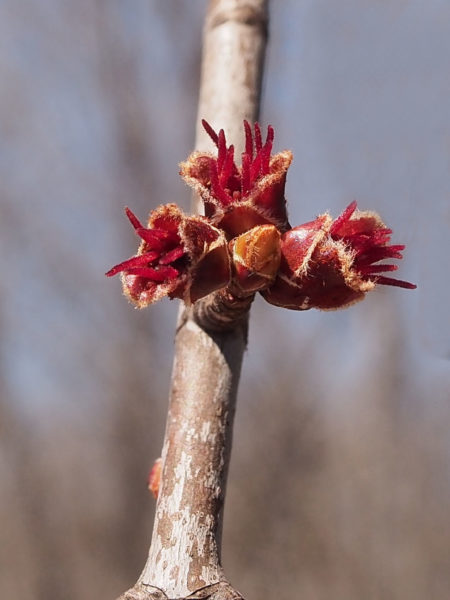 Because the opening of flower buds is not tied to the opening of leaf buds or vice versa, it must be true that the mechanisms controlling these two behaviors differ from one another in some way. One possibility, proposed many years ago, is that flowering is stimulated by its own hormone, florigen. An important early piece of evidence for the existence of such a hormone was the finding that flowering can be induced in an individual plant that is not yet in bloom by grafting it to a different individual that is already flowering.

In recent years a strong candidate for this hormone has emerged, a substance called FT protein. For technical reasons, however, these recent experiments have mostly been done on just one species, an annual called Arabidopsis thaliana (Family Brassicaceae). In this species, FT protein produced in the leaves is transported upward and causes the tip of a growing shoot to stop producing leaves and to produce flowers instead. Investigators are just starting to understand how these findings might apply to trees in which separate leaf and flower buds are formed during the previous growing season. It’s complicated!

Spring days prompt us to step outside and revel in the sunshine and in all the life that is reappearing all around us, especially the buds and flowers that are bursting forth. If we pay attention to the details of what is happening and remember just a few of the processes taking place within the plants—changes beyond our immediate sensory experience—we will find that there is even more to relish. Try it and see!

20 responses to “The Buds of Spring”