When we walk through a forest, we are surrounded by trees growing up toward the sky. The walk may be in summer or winter, the trees may be evergreen or deciduous—no matter. Most are primarily straight, like these red alders (Alnus rubra) that abound at Earth Sanctuary, one of my favorite spots on Whidbey Island, north of Seattle. Some are twisted in complex ways, but even these  grow mostly upward from the surface of the soil. What mechanisms generate the upward growth that is so characteristic of most trees, and indeed the great majority of all land plants? 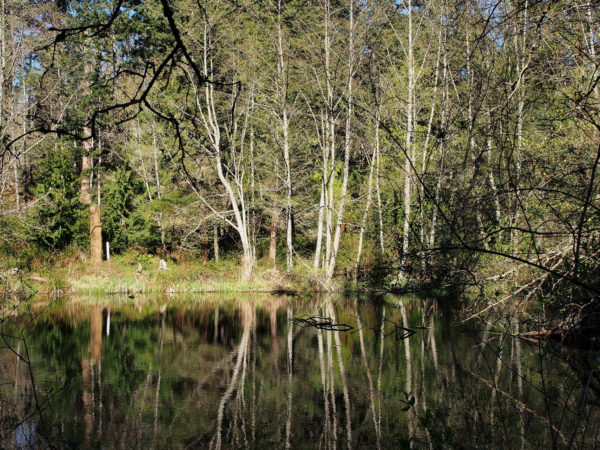 In the previous post we developed the idea that the information required to guide a plant’s growth upward comes primarily not from the light of the Sun, as most people think, but rather from the gravitational interaction between the plant and our Earth. How this happens was left unexplained and is the subject of today’s post.

Here are the three main ideas we will examine. In order to behave appropriately in the field of gravity, any multicellular organism must have a gravity detecting system, a signaling system, and cells that generate its behavioral response. Plants are like that too. They have gravity-sensing cells, they signal orientation in the field of gravity by means of a hormone, and they respond to gravity through the localized elongation or contraction of cells in the stem or trunk. These cellular behaviors are reflected in the plant’s shape.

Distinctive cells detect the direction of gravity. Plant gravity receptors are single cells with a recognizable structure. Within each such cell, called a statocyte, is a cluster of starch-storing organelles, collectively called the statolith. Denser than the cell’s cytoplasm, the statolith moves downward in the field of gravity. In a normally oriented stem, the statolith is found at the bottom of each statocyte. If the stem is reoriented, the statolith still presses downward, but now on a different part of the cell. This movement of the statolith to a new location within the statocyte is the first step in the mechanism of gravity detection, and plays an important role in generating the hormonal gravity signal.

Statocytes are found around the circumference of the stem or trunk and also in root tips. In herbaceous plants and in the seedlings of flowering trees, these cells are situated around the stem in a discrete layer called the starch sheath. This starch sheath is lost as a tree trunk grows, but new statocytes develop among the cells of the phloem, the inner bark.

A hormonal signaling mechanism conveys information about gravity. The ultimate response of a plant to gravity is a pattern of growth, so there has to be an informational link between the initial detection of gravity by the statocytes and the biochemistry of the growth-generating cells. A major component of the signaling system turns out to be a hormone called auxin.

Auxin, which was first discovered because of its role in the response of plants to light, is involved in the regulation of many developmental processes. The response to gravity is among them. Auxin is synthesized primarily, though not exclusively, by cells at the tip of the shoot and is then transported down the stem. Soon it arrives at a distinct zone where newly-formed cells elongate substantially. Auxin is the agent that brings about the lengthening of  individual cells, and thereby of the whole stem. The more auxin that is available to these cells, the more they elongate. This action of auxin is central to our explanation of the behavior of plants with respect to gravity.

Let’s look at an example of how this works. In the post Growing Upward – A we looked at the response of a small nursery pot of young marjoram to reorientation in the field of gravity, first in the light and then in the dark. The picture below, taken from that post, shows what happened: stems placed in a horizontal orientation quickly curved upward, whether they were growing in the light or in the dark. Now we can offer an explanation of what lay behind this behavior. The tip of each shoot was producing a steady supply of auxin, which was transported down the stem. As long as the stems were vertical, the distribution of auxin was symmetrical all the way around, all cells in the elongation zone received the same amount, and the stems grew straight up. When the plant was laid on its side, auxin was preferentially transferred to the underside, where it caused greater cell elongation than took place on the upper side. This created the upward bends we observed. 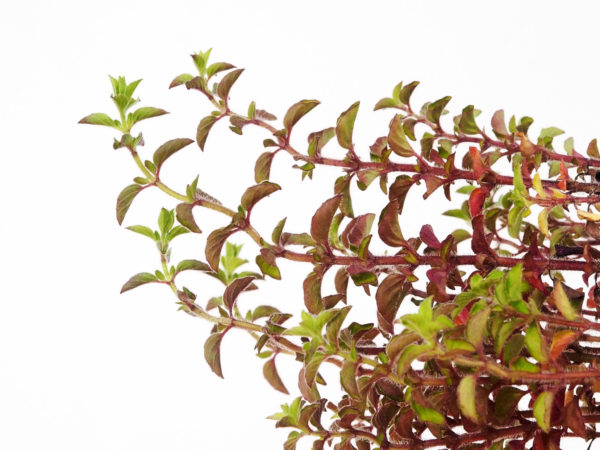 By what mechanism was the movement of auxin diverted from lengthwise along the stem to sideways, toward the stem’s new bottom side? Currently, a favored hypothesis is this. Auxin does not simply flow from where it is synthesized by cells in the tip of the growing stem; rather, the hormone is transported from one cell to the next by a molecular process that requires metabolic energy. Statocytes are cells that transport auxin. When these cells are reoriented in the field of gravity, the resulting relocation of the statoliths causes a redistribution of the molecules that facilitate the transport of auxin. With the transporting molecules relocated, auxin is transported in the new downward direction, i.e. toward what is now the underside of the stem. (Science is a progressive effort. The mechanisms linking statolith relocation to the relocation of auxin-transporting molecules have not yet been worked out.)

Gravity elicits a range of cellular behaviors. Here are four different examples of how cells respond to the pull of gravity. 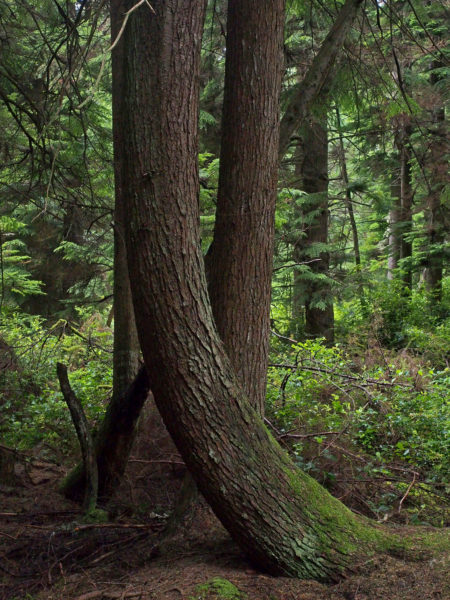 This account of how plants respond to the force of gravity is greatly simplified. For example, hormones other than auxin also appear to play a role. The movement of auxin is more complex than I have portrayed it to be, and its role in the formation of reaction wood is as yet unclear. Reaction wood plays more roles than just correcting deviations from the vertical. Many other questions also remain open.

Nonetheless, this simplified account has given us a peek into the interior of a living, growing plant as it responds to a ubiquitous force, gravity—a process we rarely think about. When you take your next walk in the woods, look around and pay attention to the trees and other plants you see. Imagine the multiple mechanisms that enable them to grow upward: the production of auxin at the growing tip, its movement from cell to cell along the growing stem, its rerouting sideways in response to a deviation from the vertical sensed by specialized statocytes, and in trees the formation of reaction wood and the consequent bending of an already-established trunk. The inner life of a plant is wonderfully dynamic, is it not?

4 responses to “Growing Upward – B”