I was a professor of biology at the University of Washington in Seattle from 1969 to 2002. My specialty for all of my academic life was neuroscience, but the very first love of my scientific life was the world of plants. It was peering through a microscope at the brightly colored petals and stamens of an Emperor tulip during my first college course in biology that got me hooked, that literally kept me up at night trying to learn as much about living things as I could. Not only that, it played quite a role in my courtship of Yvonne, whom I married a few months after graduation and with whom I continue to share life, love, and interests 55 years later.

I have long been fascinated by the deep questions that arise from the study of living systems, whether animal or plant. How does light entering my eyes cause the cells of my retina to send signals to my brain? How does the electrical activity of brain cells transmute into a perceived image of the world around me so that I can see flowers? How does a plant know where the greatest amount of sunlight is available, and direct its growth toward it? How do we get to actually understand anything, understand so precisely that we can calculate the forces needed to send a vehicle to the Moon and now to Mars? And who is the asker of these questions, anyway?

Over time, my fascination with the natural world has been enriched by a growing sense of connection, a sense of myself as an integral part of the web of life. I not only understand this intellectually, as every biologist does, but I also increasingly feel it. I sense clearly that, in the words of the poet Max Ehrmann and of a song from the 1970s, I am a child of the Universe.

This, then, is your author: a neuroscientist who loves plants and ponders big questions. I hope that you will enjoy joining him on some of his wanderings through the living world that surrounds us all and to which we belong completely, a journey guided by fascination, appreciation, and a sense of connection. 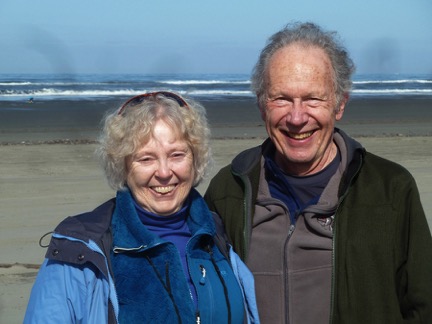 The Author As Scientist

Fellow of the American Association for the Advancement of Science (AAAS), elected 1981.

Founding Co-Director, Program on the Environment, University of Washington, 1997-2002.

Author of book on Slovak family and national history, published in two languages:

If you’d like to leave me feedback, ask a question, or request any other information, please use the form below. Thank you!