Water and the Dynamic Life of Molecules

Water is abundant on our Earth and is also essential for all of life as we know it. It is part of our daily experience—we see it, we drink it, we feel it on our skin. But what is water? How does it get the properties that are so familiar to us? Why is it central to the processes of life? Let’s take a look.

THE MOLECULAR ARCHITECTURE OF WATER

Even in common parlance, water is often referred to as H2O, the chemists’ shorthand for a molecule that contains two atoms of hydrogen and one of oxygen. When joined in a single molecule, these three atoms collectively assume a characteristic shape, sort of a broad-based arrowhead with the oxygen at the tip and the two hydrogens forming the two tails. This arrowhead has an extremely important attribute: the tip is slightly negatively charged and the tails are slightly positively charged, while the molecule as a whole remains electrically neutral. We designate a molecule like this, with distinct positive and negative regions, as polar.

Thus, water molecules are small (made up of only three small atoms) and polar. This combination of properties underlies many of the properties of water as a whole.

THE STATES OF WATER

Polar molecules like water are held close to one another by their electrical charges—positive to negative and negative to positive—and tend to separate from one another because of the vigor of their motions.

When it’s sufficiently cold, the attractive forces predominate and water freezes into a solid—ice. In the solid state, most of the water molecules remain in stable locations relative to their neighbors, but in those locations they continue to vibrate or oscillate. Molecular motion slows down progressively as the temperature approaches absolute zero (0 degrees Kelvin, -273.15 degrees Celsius, or -459.67 degrees Fahrenheit). 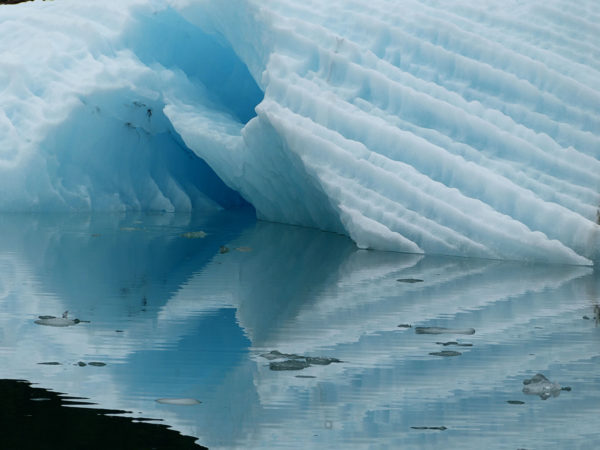 There are many examples of ice in nature. Here, for example, we see part of a small iceberg floating in the waters of LeConte Sound in Alaska.

When it’s warmer, above water’s freezing point, the momentum of agitated water molecules partially overcomes the electrical attractive forces between them and they bump into or glide over each other forming liquid water. 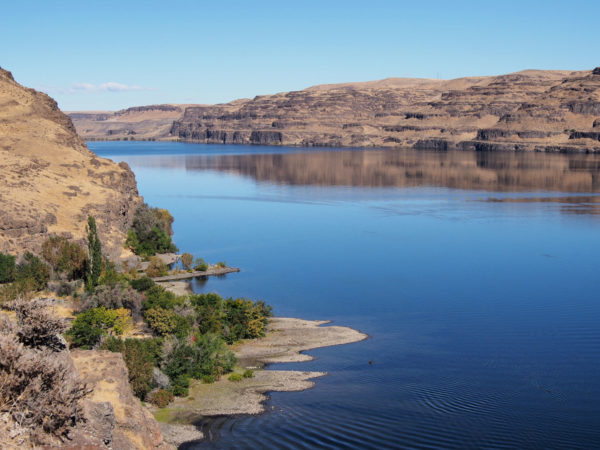 Here we see the Columbia River carrying liquid water, previously dropped as rain or snow throughout its watershed, toward the Pacific Ocean. In this scene, we can imagine countless molecules of H2O agitatedly bumping into each other but still held in close proximity by electrical attraction.

Once in the air, water molecules are far apart and move fast, so that electrical attractive forces between them become negligible. We can think of these water molecules as randomly dispersed among the other molecules that collectively constitute air, including nitrogen, oxygen, argon, and carbon dioxide.

All the molecules comprising air (or any gas) are in constant motion. Scientists have calculated that under ordinary atmospheric conditions each molecule travels at several hundred meters (around a thousand feet) per second, bumps into another and promptly bounces off some ten trillion times a second, and travels an average of 0.1 micrometers (0.000003937 inches) between collisions. This minuscule distance is still a thousand times greater than the size of a gas molecule. So, the air we live in, and take for granted, is filled with tiny molecules in incessant, high speed, and turbulent motion! The warmer the air (or liquid water) is, the faster these molecules move.

None of the molecules comprising air except for water are polar, so there is no electrical attraction among them. It’s different for water. If their movements bring them close together, the polar molecules of water darting about in the air attract one another, just as they do in the liquid or the solid state. They can collect to form droplets that we see as steam, mist, or clouds. Exactly how this happens is quite complicated, and we will not go into any of the details here. Ultimately, these droplets may coalesce to form raindrops or freeze to form snowflakes.

Water molecules regularly pass among the solid, liquid, and gaseous states.  Movement between solid and liquid is illustrated in this picture taken on Lake Superior. Molecules locked into the ice can escape into the surrounding liquid water, and those that are in the liquid water can equally lock onto the crystals of existing solid ice. 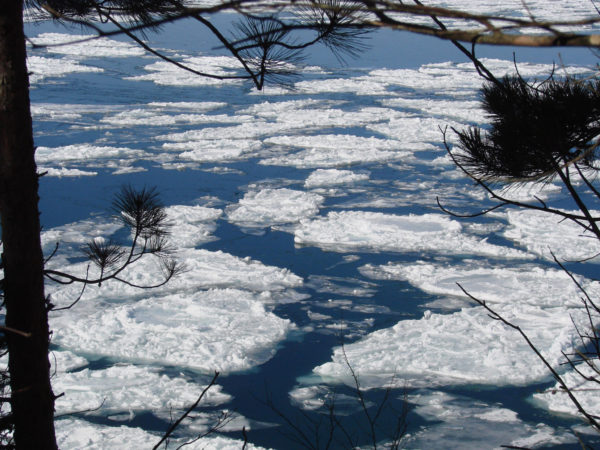 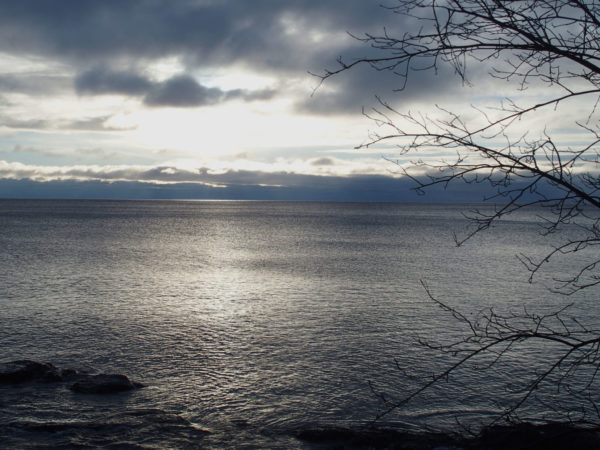 We have already imagined water molecules dancing over the Columbia River. Here is Lake Michigan as seen from the Wisconsin shore. Like the Columbia, this enormous lake gives no hint that untold numbers of water molecules are escaping from its surface and contributing to the humidity of the air above it. 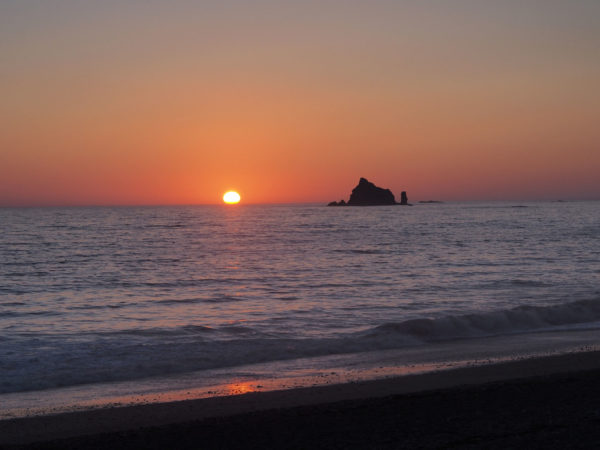 And here is the Pacific Ocean, the most massive body of water on Earth, seen from the wilderness coast of Washington. Again, we can see no clue to the massive evaporation that is taking place. We just have to imagine the trillions upon trillions of water molecules erupting out of the ocean surface and dispersing into the air.

While in the air, these molecules act as a greenhouse gas and help warm the Earth. When they condense into droplets of liquid water they form clouds. Clouds reflect solar energy back into space and thereby function as a component of the Earth’s cooling system. They may also release their water as rain and snow over the land, and thereby help sustain the forests and the fields. In ways like this, water molecules that have evaporated into the air, although invisible to us, play an essential part in sustaining life on Earth. 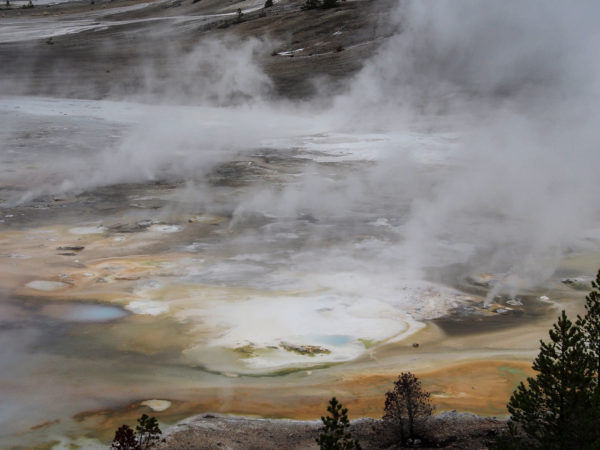 Under special circumstances we can almost catch evaporation in the act. For example, here is a hot pool in Yellowstone National Park. Because the water is warm or even hot, molecules escape into the air above at a rapid rate. Because the air is cold, especially in winter, they slow down and condense at, again, an unusually high rate. The resulting tiny water droplets scatter light, and we see them as what we most often call steam. A similar phenomenon occurs over ordinary lakes, especially in the fall. The water at the surface of the lake is warmed by the sun during the day and does not cool much during the night. The air above the lake, however, does cool, especially on clear nights. As a result, the invisible water vapor rising from the lake condenses into droplets, and an accumulation of those droplets is visible. In casual language we tend to call it mist or fog rather than steam.

We all know that ice floats, so this fact may not at first glance seem remarkable. But it actually is, and here is why. As liquid water gets colder, the movements of the H2O molecules slow down. This allows them to come closer together before separating again; thus, the number of molecules in a given volume of water rises, and the water becomes heavier. We say that its density increases. This is the reason that in lakes and oceans cold water sinks and warm water rises, producing a stratification. You can often feel this while swimming, and it plays an important role in the mixing of nutrients on which the plankton, the base of the entire food chain, depends.

As ice crystals begin to form, however, electrical forces lock their constituent molecules into a three-dimensional lattice, and in this lattice the molecules are held at fixed distances that are slightly greater, on average, than those prevailing among the jostling molecules in liquid water. For this reason, water in the form of ice is slightly lighter than the cold water around it—the  density of the ice is lower—and, so, ice floats. Water’s density is highest at roughly 4 degrees Celsius (39 degrees Fahrenheit). The greater average separation of water molecules in ice is why the iceberg we saw in LeConte Sound and the plates of ice we saw in Lake Superior floated rather than sinking.

Thus, the fact that the locked-in H2O molecules in ice are slightly farther apart than are the molecules darting about in near-freezing water explains two familiar facts: (a) ice floats, and (b) ice expands. The floating of ice is important to life on Earth. It is what keeps many lakes from freezing all the way through during a cold winter, thereby sparing the aquatic organisms living there from death by freezing. And we humans who live in a region with cold winters are acutely aware that water expands as it freezes because this roughly 8% expansion can lead to water pipes bursting! Freezing and thawing is also an important factor in the weathering of rock and thus ultimately in the formation of new soil. On the other hand, the expansion of ice relative to cold water is a threat to living organisms, because when ice forms within cells it tears apart the membranes that form the boundary between the interior of the cells and their environment and thereby kills them. Organisms that live in freezing environments have evolved special mechanisms to deal with this threat.

THE DYNAMIC LIFE OF MOLECULES

As we routinely move about the world, we almost never think of the fact that all of the molecular constituents of our world are in constant motion. This is as true of the molecules that make up our own bodies as it is of the molecules comprising air, water, and the bodies of other living creatures all around us. Does bringing the incessant movement of all atoms and molecules to mind affect your sense of your own presence on the planet? Does it leave a mark on your appreciation of the many mechanisms that brought your body into existence? Does it enrich your understanding of the many interrelationships we examined in the post The Earth System? Try it and see!

14 responses to “Water and the Dynamic Life of Molecules”