In the Cold Midwinter

Yvonne and I like to go cross-country skiing when we winter in Minnesota. Winter days are often sunny, the snow is powdery, the trails are well-groomed—in short, the skiing conditions are wonderful. Still, we do have to be mindful of what we undertake, for the temperatures can be very, very cold, and wind chill makes conditions even worse. Anyone who stays outside for very long in the continental mid-winter, as so many Minnesotans do, may face the threat of injury or even death from exposure to the bitter cold if they are not adequately prepared. That’s why, in this photo, Yvonne is well bundled up! 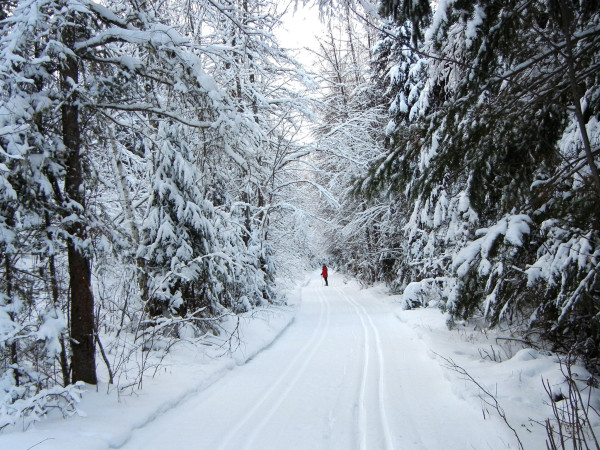 Cold is a real issue for our non-human cousins as well. Many, like deer, bison, and cattle prepare for the winter by growing an extra-thick coat  of fur. Others, including bears and this perky golden-mantled ground squirrel (Spermophilus lateralis) seen on Mt. Rainier in late summer, hibernate. To get out of 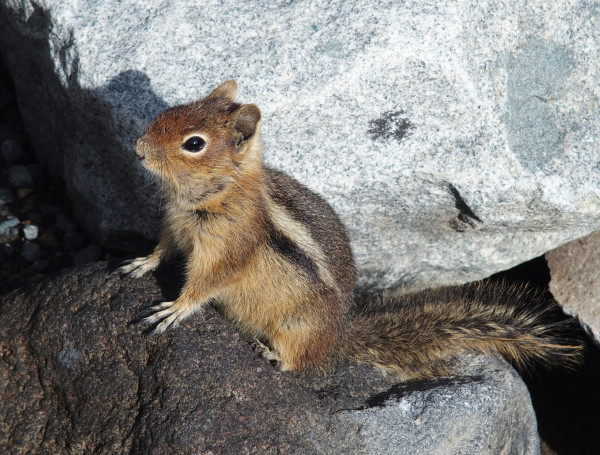 the cold as much as possible, they dig burrows and even line them with plants and lichen for extra insulation. They drastically reduce their use of stored energy by becoming largely immobile, slowing their breathing and heart rates, and shutting down much of their brain activity. Small hibernators like the ground squirrels even allow their body temperatures to drop to within a few degrees of freezing. I vividly remember one of my college professors handing me a hibernating ground squirrel in lab one day. It was curled up in the palms of my hands as if it were asleep, but it was immobile and startlingly cold. Imagine your normally playful kitten lying inert in your hands, almost as cold as if it were frozen, and remaining that way for months on end except for the occasional brief awakening to chew a few seeds and pee!

But what about plants? No fur. No moving out of the wind or digging a cozy burrow under the snow. What keeps trees and bushes from literally freezing to death in the cold mid-winter?

We can start to delve into how plants survive the winter by looking at one of the iconic trees of the northern woods, the birch. There are about a dozen species of birches in North America. Their native ranges extend from the far northern Arctic down to the Mid-Atlantic states. Minimum winter temperatures in these regions range from -50 degrees Fahrenheit or less up north to not much below freezing in the southern part of the range.

Below we see a clump of birches (probably Betula papyrifera, paper birch) near the Gunflint Trail, the famous access road to the Boundary Waters Canoe Area Wilderness in northern Minnesota. The time is January, in the depth of winter. 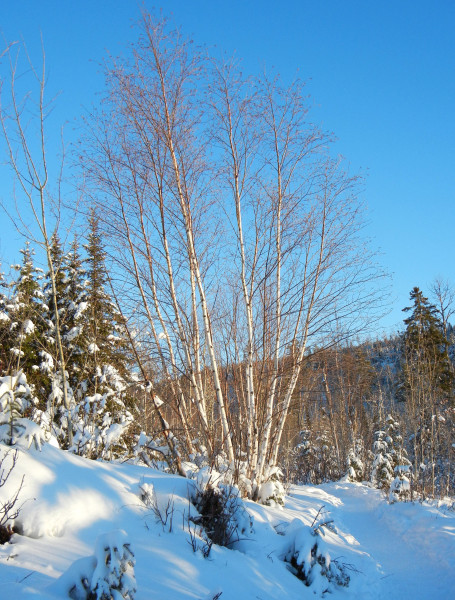 And here are some birches along the Pintler Scenic Loop between Anaconda and Philipsburg, Montana. Flint Creek is just coming back to life in early spring, and the trees and shrubs are waking up from months of dormancy in the winter. 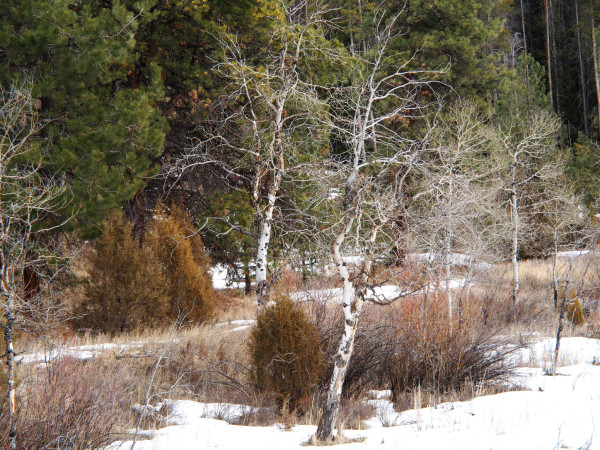 Biologists have found that birches, like other trees, survive the cold primarily in two different ways: supercooling and freezing.

Supercooling is what happens when a solution falls below its freezing temperature but there is no impurity to initiate—nucleate—the freezing process, so it remains liquid. Birches, like many other plants growing in northern latitudes, allow many of their tissues to supercool. For supercooling to help a plant not freeze even though the environmental temperature is well below freezing levels, nucleation has to be prevented. Plants usually accomplish this by synthesizing specific sugars and proteins that inhibit nucleation, and also protect the integrity of the cells’ various membrane systems. It is a class of mechanisms that some animal species (especially among fishes and insects) have also developed, though not to the same degree as plants.

Freezing occurs when nucleation is not prevented and water does form ice crystals. Normally ice is lethal to living cells – that’s why frostbite is so dangerous and can even force amputation. However, in freeze-tolerant plants the ice forms in places where it is not damaging. Most often this is between cells. As water is drawn into ice crystals outside the cells, the normally watery interiors of the cells become dehydrated. Dehydration means that the solution remaining within the cells gets more concentrated, which lowers its freezing temperature and thus makes it increasingly resistant to the formation of lethal ice crystals. However, there are limits to the dehydration that plant cells will tolerate. Excessive dehydration is the most common cause of frost damage in freeze-tolerant species.

Both mechanisms can operate within a single plant, but with variation in the details. For example, some birch species allow even their interior tissues to freeze. The hardiness zones of these species tend to extend further north, into even more frigid regions of the continent, than do the ranges of species that depend on interior supercooling. It also appears that freeze-tolerance is a more recent evolutionary trait than is supercooling. Possibly its evolution allowed particular species to extend their ranges into northerly latitudes from which they had been excluded while they depended exclusively on supercooling.

Our understanding of the overall response of trees to freezing cold is enriched by additional findings that relate to gene activity, and to advance preparation for the cold season—cold acclimation.

Gene activity: Modern gene monitoring technology allows us to estimate how many genes are involved in any particular activity an organism undertakes. It appears that the activity levels of roughly one third of a tree’s genes are modified as it undergoes exposure to severe cold! These genes, of course, are not exclusively devoted to the tree’s cold response, but knowing the numbers helps us realize that plants mobilize tremendous resources to deal with environmental stresses.

Cold acclimation: Most trees do not wait until it gets cold to mount a cold response. All plants, at least in temperate climates, situate themselves in the seasonal cycle of the year. They know whether it is currently spring or fall, summer or winter. One of their major cues is daylength, which they measure with the aid of pigments called phytochromes, quite distinct from the pigments used in photosynthesis or to give flowers their colors. So, part of the story of how many a tree survives in temperatures that would kill us if our tissues were actually exposed to them includes a preliminary step—weeks or months earlier it determined that the cold part of the year was coming, and it set its cooling defenses in motion. It did this by using light to measure daylength. Once the cold actually arrived, it also sensed the cold, and kicked its defenses into higher gear. Other trees wait until it starts to get cold, and maximum cold hardiness is generally achieved only after the cold weather sets in.

We are now in the cold part of the year, and naturally are mindful about staying warm and not slipping on the ice. But take a moment to enjoy the outdoors with the awareness that every creature that lives outdoors through the winter has an array of mechanisms that allow it to do so, mechanisms that have evolved under the pressure of natural selection and are a part of what matches the organism to its environment. This is as true for plants as it is for animals.

10 responses to “In the Cold Midwinter”