Toward the end of summer, people with gardens start to notice spiders hanging in magnificent orb webs. The spiders were there long before, of course, having hatched out in the spring, but they were tiny and inconspicuous. Now many of the females are big and getting ready to lay their eggs.

Orb weaving spiders are remarkable animals. They have eight eyes, but they negotiate the world primarily through their ability to sense vibrations. The females are far larger than the males, and post-mating cannibalism of males by females is not unknown. And, all spiders spin threads, whether or not they arrange them into a web. These threads are far stronger than the silk threads spun by silkworms and other insects, and they play important roles in the spiders’ locomotion and capture of prey.

In the picture below you see a mature female cross orbweaver (Araneus diadematus), also known as the European garden spider, at the end of summer. She is hanging head-down in the hub of the web she has spun on our front porch, ready to pounce on any prey that might become entangled in the sticky threads of her web. The cross-shaped white decorations on her swollen abdomen are characteristic for the species. Cross orb weavers are common not only in Europe, where the species originated, but also across the span of southern Canada and down into both the eastern and the western United States. They seem to be multiplying in the north of the American heartland as well. 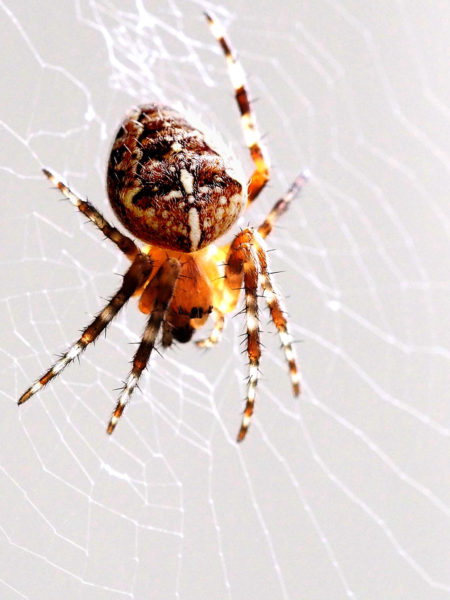 Cross orbweavers are close relatives of perhaps the most famous spider in American literature, Charlotte, the heroine of E. B. White’s classic Charlotte’s Web. Charlotte was a grey farm spider, Araneus cavaticus, a species that is abundant in the Northeast where the story takes place.

The cross orbweaver above was a regular denizen of our front porch for several weeks. Every morning her web was there, intact and beautifully constructed. She regularly took it down by eating it, and promptly used the proteins of which it was made to spin a new web. One day I caught her in the act of creating a web and took the picture you see below. 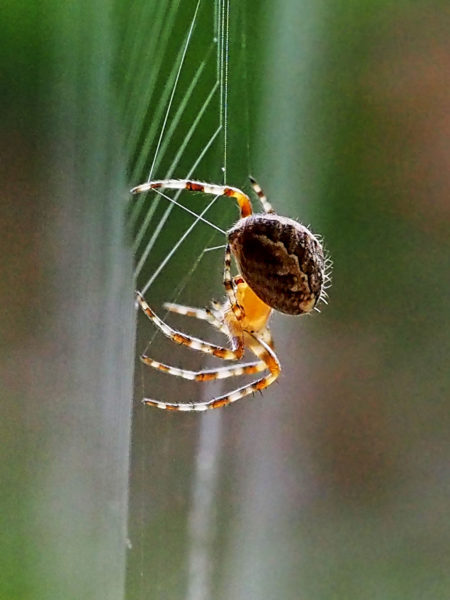 This photograph shows a great deal about how a spider accomplishes the challenging task of constructing a web in which a vigorous insect, often larger than the spider herself, will be caught in such a way that the spider can grasp her prey and inject her venom without becoming tangled herself.

Look first at the tip of her abdomen. The new thread is coming out of a tiny protrusion called a spinneret. Each spinneret is studded with an array of much smaller protrusions called spigots. Inside the abdomen, behind the spinnerets, are glands that produce silk proteins (called fibroins) that are in the form of protein molecules jostling each other in a thick liquid solution. To extrude this solution and make a fine thread, the spider raises the pressure inside her body to squeeze the glands and push the solution out through the spigots. At the same time, she pulls the liquid out of the spinneret with one of her hind legs. In this process, the protein molecules become aligned with one another and chemical bonds form between them, producing a final thread that is both elastic and astonishingly strong (by weight it is stronger than steel). Our Araneus diadematus has three pairs of spinnerets. Each pair produces threads with specific characteristics. For example, the web’s orbital or circular threads are sticky, good for snaring prey. Others, like the radial threads linking the hub to the periphery of the web, are extra strong but are not sticky.

The photograph also illustrates the regularity of orb webs, which is another of their marked characteristics. We can see that the threads that have already been put in place at this point in the construction process are very regularly spaced. With her left hind leg, the spider is pulling the next thread out of the spinneret and into its proper place. As you can see, this thread is already attached at one end. When it is complete, the thread will be attached at another point. Our Araneus establishes the angle between threads by sensing the separation between existing threads using her front legs, and laying down the next thread accordingly. Here and here are excellent accounts of the whole process.

This is an example of genetically programmed behavior: a female spider spins a web with a form typical for her species on her first attempt. There is, however, recent evidence that as spiderlings get older and spin more webs, the details of the webs become more refined, thus revealing that spiders can learn from experience.

It is easy enough to say that a behavior is genetically programmed, but such a statement masks how wonderful this process is and how little we know about how it works. Listen to this conversation from Charlotte’s Web. Mrs. Arable is seriously concerned that her eight-year-old daughter, Fern, is spending way too much time in the barn. Fern is also claiming that she can hear the animals, including Charlotte, talk. Mrs. Arable has come to the town doctor, Dr. Dorian, for advice. Soon they get to talking about the webs that Charlotte, the spider, has been spinning.

“What’s miraculous about a spider’s web?” said Mrs. Arable. “I don’t see why you say a web is a miracle—it’s just a web.”

“Ever try to spin one?” asked Dr. Dorian.

Mrs. Arable shifted uneasily in her chair. “No,” she replied. “But I can crochet a doily and I can knit a sock.”

“Sure,” said the doctor. “But somebody taught you, didn’t they?”

“My mother taught me.”

“Well, who taught the spider? A young spider knows how to spin a web without any instruction from anybody. Don’t you regard that as a miracle?”

We scientists don’t generally believe in miracles in any literal sense, but surely wonder at our amazing world is at the heart of what we do!

The circular threads of a web like Charlotte’s, or the one spun by the cross orbweaver on our front porch, are sticky and trap any prey that blunders into them. The spider can tell where in her web the prey is located by which of the web’s radial threads vibrate the most as the prey struggles, or which exhibits the greatest tension when actively pulled by the spider’s sensor-laden legs. Here is how Charlotte proceeds from there:

A fly that had been crawling along [the pig] Wilbur’s trough had flown up and blundered into the lower part of Charlotte’s web and was tangled in the sticky threads. The fly was beating its wings furiously, trying to break loose and free itself.

“First,” said Charlotte, “I dive at him.” She plunged headfirst toward the fly. As she dropped, a tiny silken thread unwound from her rear end.

“There!” said Charlotte. “Now I knock him out, so he’ll be more comfortable.” She bit the fly. “He can’t feel a thing now,” she remarked. “He’ll make a perfect breakfast for me.”

Our cross orbweaver does not leap, but she does dash toward her prey along the most appropriate radial thread. And she does, indeed, spin her prey as she releases thread from her abdomen; within seconds the prey is immobilized. Here is the end result, as I observed it in our front yard. I doubt that the whole process lasted even 10 seconds! 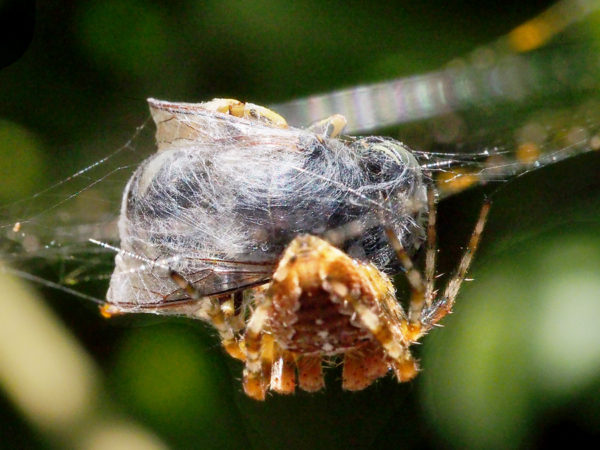 Piercing the wrapping with her pincer jaws, she will extrude a fluid mixture that includes enzymes that will ultimately kill the fly and dissolve its tissues as she chews on them, so that she can suck up the resulting juices, just like Charlotte said.

We have only had a few glimpses of the life of an orb spider, but you can look for other moments yourself. In the spring you may see spiderlings emerging by the hundreds from a silk egg sac that their mother spun the previous fall. You may see these young spiders spin out a light thread that allows them to be wafted up on the slightest breeze and dispersed far from the egg sac. Wilbur the pig watched such a diaspora. It’s called ballooning:

One fine sunny morning [in the spring]  after breakfast, Wilbur stood watching his precious sac. He wasn’t thinking of anything much. As he stood there, he noticed something move. He stepped closer and stared. A tiny spider crawled from the sac. It was no bigger than a grain of sand, no bigger than the head of a pin. Its body was grey with a black stripe underneath. Its legs were grey and tan. It looked just like Charlotte.

Wilbur trembled all over when he saw it. The little spider waved at him. Then Wibur looked more closely. Two more little spiders crawled out and waved. They climbed round and round on the sac, exploring their new world. Then three more little spiders. Then eight. Then ten. Charlotte’s children were here at last. . .

For several days and several nights they crawled here and there, up and down, around and about, waving at Wilbur, exploring their home. There were dozens and dozens of them. . . They grew quite rapidly. Soon each was as big as a BB shot. They made tiny webs near the sac.

Then came a quiet morning when Mr. Zuckerman opened the door on the north side. A warm draft of rising air blew softly through the barn cellar. The air smelled of the damp earth, of the spruce woods, of the sweet springtime. The baby spiders felt the warm updraft. One spider climbed to the top of the fence. Then it did something that came as a great surprise to Wilbur. The spider stood on its head, pointed its spinnerets in the air, and let loose a cloud of fine silk. The silk formed a balloon. As Wilbur watched, the spider let go of the fence and rose into the air. . .

Then another baby spider crawled to the top of the fence, stood on its head, made a balloon, and sailed away. Then another spider. The air was soon filled with tiny balloons, each balloon carrying a spider.

If you look hard, you may see spiders in your yard or in fields that you walk through, especially in the morning when their webs are so often covered with droplets of dew. And you may be lucky enough to find a spider spinning her web or wrapping her prey, just as I did. And in the spring, you may see tiny spiderlings emerging from their sac or ballooning away. A miracle in the making!