What Darwin Taught Us

Charles Darwin was not quite 23 when, in 1831, he set off on his legendary journey as a naturalist on board the sailing vessel HMS Beagle. In earlier years he had spent time studying medicine, and when he did not show much enthusiasm for the medical profession his father wanted him to train as an Anglican priest instead. Darwin, however, was resistant to both these respectable paths and had already immersed himself in the study of the natural world. His father relented and paid for Charles to undertake his journey on the Beagle.

By the time he returned home almost five years later, Darwin’s fascination with nature had turned into a passion that would become life-long. Over the years he studied plants and their movements, barnacles, earthworms, orchids, carnivorous plants, and many other topics, even human emotions. During the course of his life he wrote 25 lengthy volumes describing his original studies. His most famous accomplishment by far, however, and one that changed biological science forever, was his theory of evolution. Darwin put this theory forward in meticulous detail in his seminal book, On the Origin of Species by Means of Natural Selection, which wasn’t published until 1859, more than twenty years after the Beagle’s return. Then in 1871 Darwin published The Descent of Man, and Selection in Relation to Sex. In this volume he applied the basic ideas that he had developed in relation to the rest of the natural world to the one group that might have been thought to be different, humankind.

Darwin explained, substantiated, and illustrated his ideas in enormous detail; each book was several hundred pages in length. Still, it is possible to state his key conclusions very succinctly. In my interpretation, Darwin’s core message, cast in more modern terms, can be expressed by these two points:

Here is how Darwin himself put these central messages in The Origin of Species. First, on natural selection:

As many more individuals of each species are born than can possibly survive; and as, consequently, there is a frequently recurring struggle for existence, it follows that any being, if it vary however slightly in any manner profitable to itself, under the complex and sometimes varying conditions of life, will have a better chance of surviving, and thus be naturally selected. From the strong principle of inheritance, any selected variety will tend to propagate its new and modified form.

And here, in the book’s oft-quoted concluding passage, on our common heritage:

There is grandeur in this view of life, with its several powers, having been originally breathed into a few forms or into one; and that, whilst this planet has gone cycling on according to the fixed law of gravity, from so simple a beginning endless forms most beautiful and most wonderful have been, and are being, evolved.

What were some of the observations that stimulated Darwin’s scientific imagination as he sailed on the Beagle, making many stops for exploration? First was the astonishing variety of plants and animals he encountered, many of them quite unlike any he had seen at home in England. We can get a tiny glimpse of what he saw. A couple of years ago my wife Yvonne and I were able to visit the Galápagos Islands, one of the most famous stops on the voyage of the Beagle and a place where Darwin made some key observations that he and others would ultimately relate to natural selection and the formation of new species. The biota on the Galápagos is still stunning today. If he’d had a camera, Darwin could well have taken the pictures below!

For example, here is a Sally Lightfoot crab (Grapsus grapsus, originally Cancer grapsus). Darwin collected this species and brought specimens home with him. 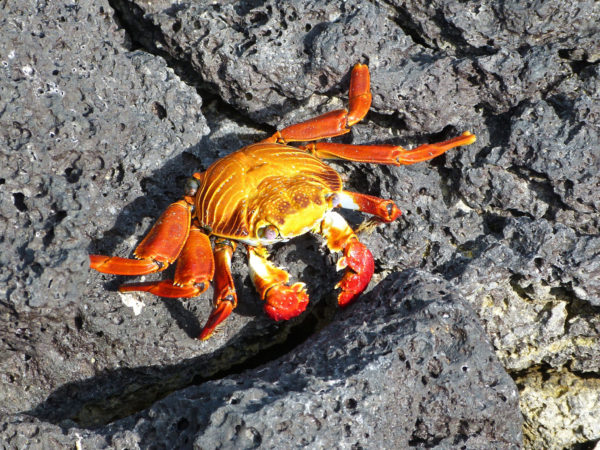 And here is a pair of flamingos (Phoenicopterus ruber). They may be mates, as Galápagos flamingos are believed to pair for life. Darwin studied these birds, even analyzing their stomach contents to try to understand what they were feeding on. 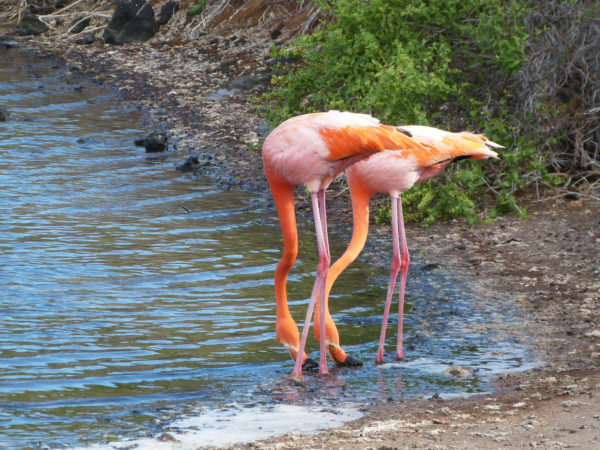 Among the most famous members of the fauna of the Galápagos are the giant tortoises (Chelonoidis). Different species are found on the various islands, and sometimes even on different parts of a single island. Darwin was fascinated by these extraordinary animals and tried hard to figure out how their structure and their behavioral habits might have come about. 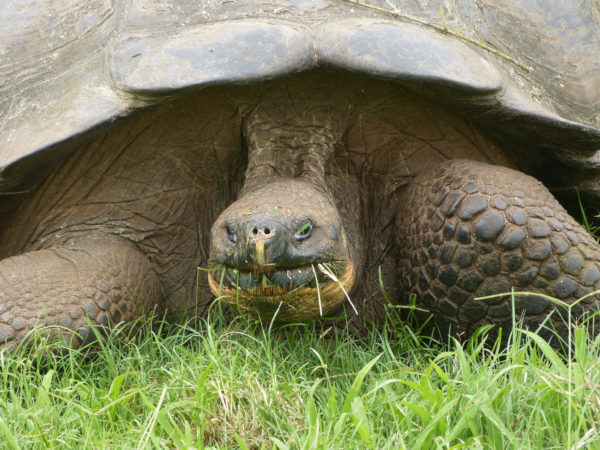 Creatures like this capture everyone’s imagination, not only Darwin’s. You don’t have to go to the Galápagos, however, to recognize the stunning variety of forms in which life manifests on Earth. In temperate climes, including where we live in the Pacific Northwest you can see scenes like this one, with the blooms of cherries and narcissus breathing spring. 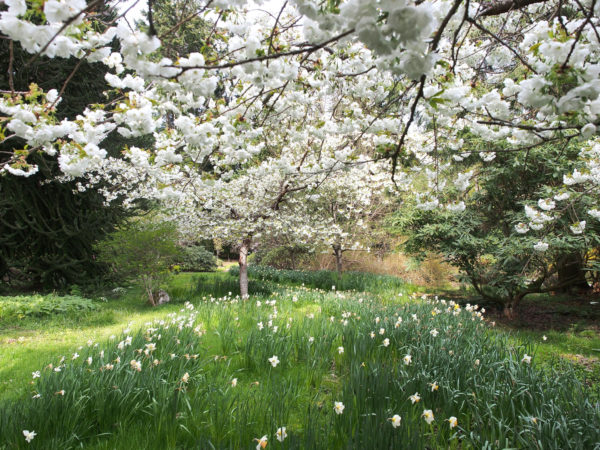 A little later in the season you might see this red admiral (Vanessa atalanta) perched on a rhododendron flower in the midst of a bout of feeding on nectar. 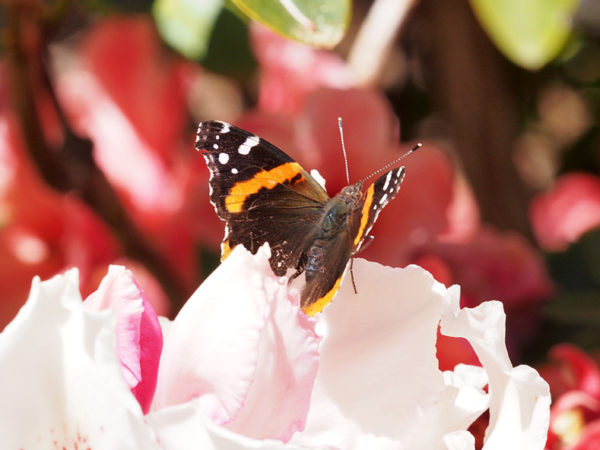 If you go out to the wild Pacific coast, you might encounter a giant green sea anemone (Anthopleura xanthogrammica). 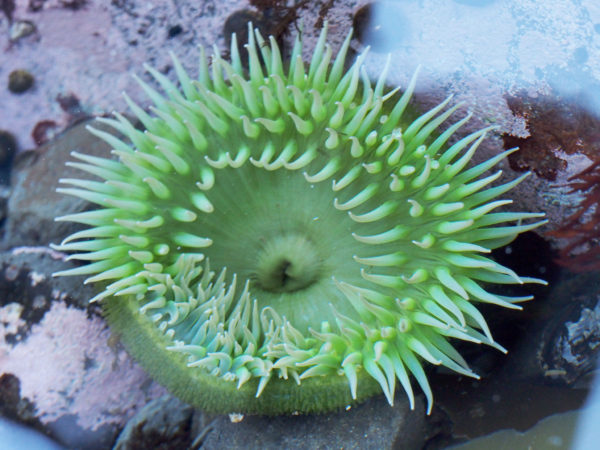 And, of course, we people love the coastal beaches and their magnificent sea stacks. 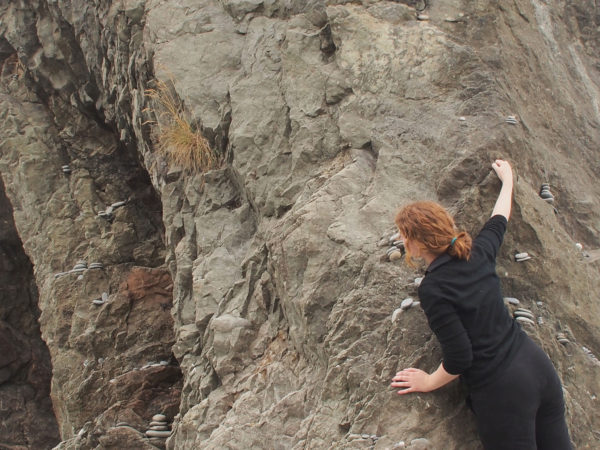 Our Earth is teeming with life like this, and even more with life that we cannot even see without special instrumentation. One of several ways to conceptualize the immense diversity life is by grouping organisms into six kingdoms—Bacteria, Archaea, Protista, Fungi, Plantae, and Animalia. Of these, our pictures have sampled only plants and animals. There is so much more!

Keeping all this magnificent diversity in mind, notice what a revolutionary claim Darwin made. He asserted that the organisms we find on Earth, no matter what they look like or where they live—and including, for example, our granddaughter Fiona as well as the green sea anemone living in a tidepool near the rock where she is climbing—are all related by inheritance from generation to generation. Their differences are due to inheritable variation and to the natural selection that operates on this variation.

This was a profoundly different understanding than that offered by the then-prevailing Biblical view that the Earth’s inhabitants had been created by God as fully-formed individual species. Let’s look at Darwin’s insight more closely.

Darwin made two central observations that led him to his overall theory of evolution by natural selection and its accompanying conclusion that we are all related.

In Darwin’s day the science of genetics had not yet been developed, and the actual mechanisms of inheritance that link one generation to the next and that produce variation were as yet unknown. We have come a long way since then. For example, instead of a general “strong principle of inheritance” we now talk about genes and how they work. The DNA of which genes are made has become an everyday term—we often say that something “is in our DNA.” We understand a great deal about chemical changes in DNA (mutations), both how they come about and what their effects can be. We have come to appreciate the extraordinarily complex ways in which the activity of genes is regulated, both by environmental factors and by the action of other genes. We have learned part of the story of how the activity of genes produces biological form—arms, hearts, and the wing patterns of butterflies. In recent years we have even come to recognize a whole new field, called epigenetics, that explores ways in which environmental factors can modify the activity of genes not just moment to moment but occasionally across generations. Our understanding itself evolves over time. Darwin would be thrilled!

Over the past year and a half, the posts on Nature’s Depths have taken us on many walks, through forests and on beaches, asking questions about the lives of the organisms we have encountered. The ecological interrelatedness of these organisms has been a central theme. Now I invite you to add another dimension to your contemplation as you walk—interrelatedness over time, the biological unity of all life as Darwin enunciated it so eloquently: “There is a grandeur in this view of life . . . [that] from so simple a beginning endless forms most beautiful and most wonderful have been, and are being, evolved.”

6 responses to “What Darwin Taught Us”