The Wonder That a Feather Is

Perhaps no other season feels as welcome to us as does spring. The winter months are beautiful, but they are a time of rest and quietude, a time when Nature slows down. We associate winter with short days, low temperatures, and snow or rain, and we relish the coziness of home. But as the days start to lengthen and the Sun starts to feel warm on the skin, we feel ourselves drawn outside. The snow disappears. Subtle, fresh colors appear on the plants. And the birds, many of them arriving from faraway lands, announce their presence with song, the males establishing territories and courting females. Spring is here!

Many of the birds are clad in brilliant plumage. The color patterns in the plumage are highly specific and are used by the birds as social signals or for camouflage. To a biologist, the feathers themselves raise a host of questions: How are the colors produced? How are the striking patterns produced? Indeed, how are individual feathers produced? How did feathers originate during evolution? What physiological functions do feathers serve? And on and on.

We won’t be able to tackle all these questions in a single post, so let’s start with the one to which the answers are easiest to offer, the source of the colors that so draw our eyes. As we’ll see, there is abundant complexity even here!

A good starting point is thinking about those proverbial opposites, black and white. Here are three central ideas.

How do these rather abstract ideas relate to real birds and their feathers? Here is one example. 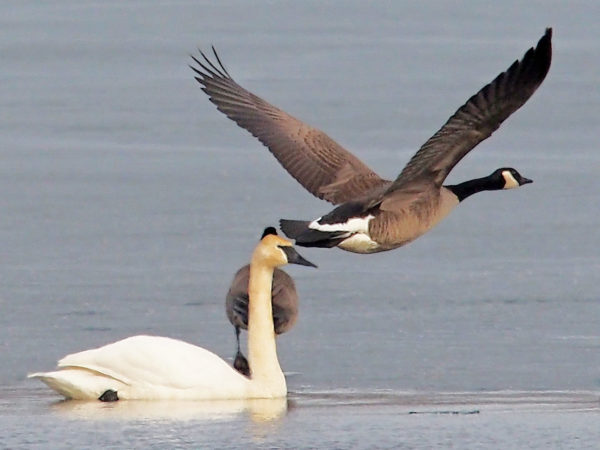 All the the feathers of the trumpeter swan on the left are white (the orange tint on the head and neck is discoloration picked up when the swan feeds under the lake water). Why such pure white? Here are some reasons:

The swan’s feathers are white, but its beak and feet are black. In contrast to the swan, the goose has some feathers that are jet black, some that are brilliant white, and many that are brownish. Its beak is black, just like the swan’s. What creates this pattern?

Biological structures, whether they are feathers or bills or skin or anything else, usually look black because they contain the pigment melanin which absorbs all wavelengths of light. Light that has been absorbed cannot be reflected, scattered, or redirected in any way and thus cannot be seen. A melanin-containing object is dark to the extent that its melanin absorbs the light being shone on it. More melanin means more absorption, so melanin-containing structures range from pale grey to jet black.

What about the brownish feathers of the goose? They, too, contain melanin, but they are slightly colored. That’s because melanin comes in several chemical forms. One is truly black. Another is brownish, meaning that it absorbs wavelengths somewhat unequally. And yet another is actually reddish because it absorbs light at the blue end of the visible spectrum slightly better than it does light at the red end, so that the remaining, unabsorbed light has a warm tint. The exact color of a biological structure containing melanin and no other pigments is determined by the balance among the handful of varieties of melanin.

We can see this principle operating in another bird, the red-breasted nuthatch. 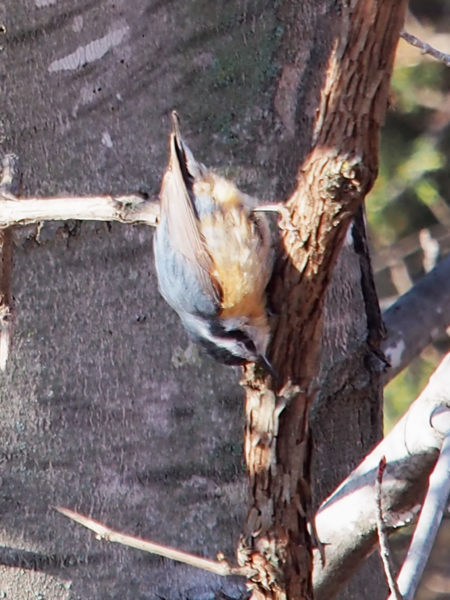 A redbreasted nuthatch (Sitta canadensis, Family Sittidae) in the Minnesota woods near our house.

This nuthatch displays much the same colors as did the swans and geese, though arranged in a different pattern. Once again there is brilliant white, plus black and grey. Instead of the brownish color of Canada geese there is yellow-orange on the breast. All these colors except for white result from the absorption characteristics of the several melanins. In the case of white, of course, there is no melanin, no absorption due to a specific pigment, just “wavelength-independent scattering” yielding white.

Melanins are the most widely distributed pigments in the animal world, and birds use them to generate an enormous range of colors and color patterns. Melanins are not, however, the only pigments used by birds. Just look at this goldfinch! 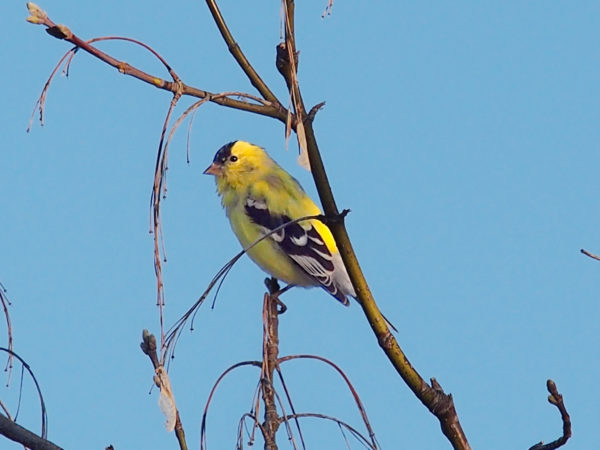 The American goldfinch (Spinus tristis, Family Fringillidae), in this case a male in Minnesota.

Once again we see black and white in a bird’s plumage. However, what most catches our eye is the brilliant yellow. Where does this come from?

Bird colors generated by pigments are produced primarily by two classes of molecules, melanins and carotenoids, though others also exist.

Our goldfinch takes advantage of both melanins and carotenoids—its black feathers are rich in melanins while its yellow feathers are packed with carotenoids. The white feathers, of course, are devoid of any specific pigments.

Now here is an aspect of the story that has nothing to do with pigments. The yellow is so intense and so brilliant in part because microscopic structures in the interior of the feathers reflect light outward. This allows the carotenoid pigments to do what pigments always do, absorb some wavelengths and transmit others, but with this added twist: The wavelength-dependent absorption takes place while light is on its way from the feathers to the eyes of the observer—that’s us and, of course, it’s also other goldfinches who might be potential mates or rivals. This is what allows the now-yellow light to be seen. When this reflection is experimentally eliminated, the yellow fades until it is hardly detectable. 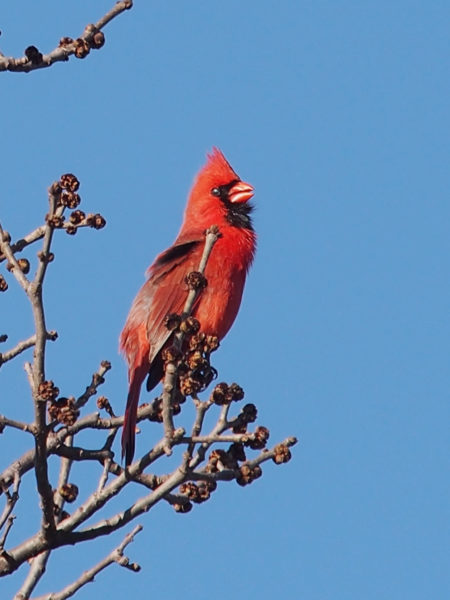 A spectacular male northern cardinal (Cardinalis cardinalis, Family Cardinalidae), announcing himself near our house in Minnesota.

Like goldfinches, cardinals also produce melanin and utilize dietary carotenoids to lend color to their brilliant plumage. A breeding male has no white feathers.

Though they both rely heavily on carotenoids, goldfinches and cardinals have different colors. This is partly because they select different diets and partly because of their internal biochemistry. For example, when the normal diet of goldfinches is experimentally supplemented with red carotenoids, their feathers turn orange. On the other hand, when cardinals are completely deprived of red carotenoids, they still grow pale red feathers. Conclusion? Goldfinches can use a variety of carotenoids in their diet, and the purity of their yellow depends at least partly on how selective they are in what they eat. Cardinals, too, depend on dietary carotenoids to produce their intensely red plumage. When only yellow carotenoids are available in their diet, however, they can biochemically convert these into red carotenoids at least to a limited extent.

THERE IS ANOTHER WAY

Thus far we have seen that pigments generate colors by absorbing some wavelengths of light more than others. In this way they convert the original white light that was composed of all visible wavelengths into a colored light composed of the less-absorbed wavelengths. In short, pigments work by subtraction. What is not absorbed is what you see.

It is possible, however, for bird feathers—and many other biological structures—to be brightly colored without resorting to pigments at all. Such colors are collectively called structural colors, and these play roles in animal biology that complement and can to some extent differ from those of pigmentary colors. Here is a dramatic example of one type of structural coloration. 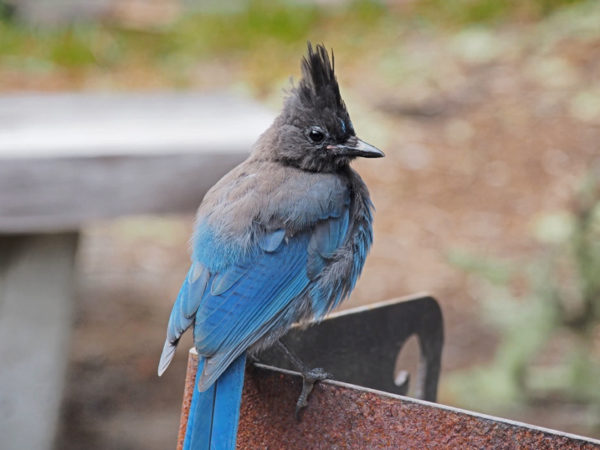 Steller’s jays (Cyanocitta stelleri, Family Corvidae) are a familiar sight through much of western North America. This one came to visit our campsite along Icicle Creek in the Cascade Mountains of Washington.

The black of Steller’s jays is due, as usual, to melanin. The brilliant blue, however, is a structural color. Internal structures within the feather, with dimensions in the range of wavelengths of light, scatter blue light preferentially. Some of that blue light ends up in the eyes the beholder and makes the jays look blue. The complete physics and structural details of the scattering process are currently the subject of intense investigation. For our purposes, it is sufficient to say that the blueness of the feathers of the Steller’s jay is due not to the presence of blue pigments but to the properties of submicroscopic internal structures made of proteins, which are themselves colorless.

Once again, however, in real life structural colors and pigment-based colors turn out to be functionally related. In individual Steller’s jays that fail to synthesize melanin, not only are the heads pale but the blue color is also considerably paler than usual. The likely explanation is that, while the wing and tail feathers are blue for structural reasons, they also contain melanin that absorbs light bouncing off the wing’s multitude of internal surfaces. This leaves primarily the blue light that has been scattered outward, and thereby makes the blue pure and intense. When the melanin is lacking, the scattered blue light is effectively diluted by the presence of other wavelengths that are no longer absorbed but are scattered and also make their way outward and to our eyes.

The intense blue of a Steller’s jay is an example of non-iridescent structural coloration. The brilliant colors of wild turkeys and a number of other bird species are examples of iridescent structural coloration. What’s the difference? The physics is complex and the boundary between the two no longer seems quite as sharp as it once did, but we can state the functional difference very simply:

The importance of viewing angle in iridescent structural coloration is illustrated in the pair of photographs of a wild turkey below. 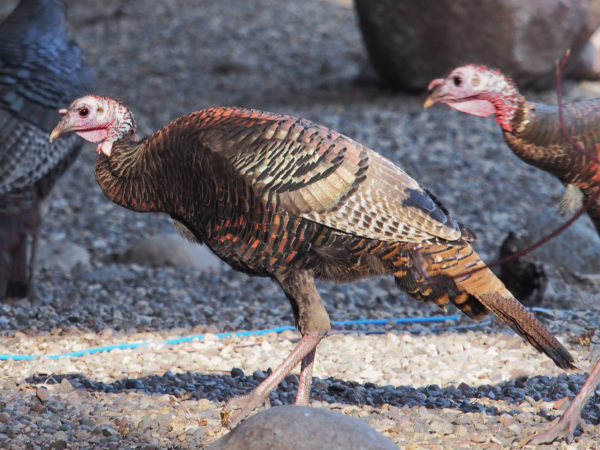 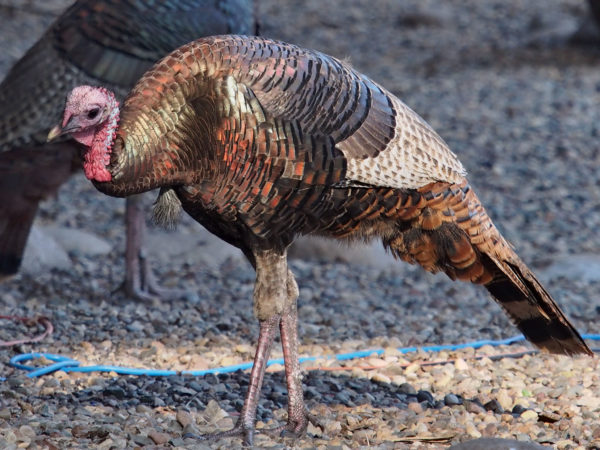 An American wild turkey (Meleagris gallopavo, Family Phasianidae) feeding at the Eastman Nature Center on the edge of the Twin Cities.

These two pictures were taken only a few seconds apart as the turkey was walking forward and also turning slightly. Compare the distribution of lights and darks, especially on the shoulders and the back. See where the bright red feathers on the side are located. The differences are the consequence of the importance of viewing angle, which can even make color disappear altogether. Now look at the wing feathers and the tail. Their colors have not changed at all, and neither has their brightness. Their color is due to pigments (melanins!), and the light scattering that is independent of viewing angle.

Our excursion through the world of color has taken us from the global to the molecular. We started by celebrating the arrival of spring. With spring come birds, staking out territories and seeking mates. Colored plumage, the more brilliant the better, is an important part of this annual activity. The colors are produced by pigments and by structural features of the feathers, sometimes alone but often in combination. Pigments are molecules. Structures are constructed out of molecules. We see light because of molecules in our eyes. Every human body, like the bodies of all living things, is made out of molecules. Indeed, the entire Cosmos of which we are a part is built out of atoms and molecules and tied together by light, by gravity, and by a handful of other forces.

In the 1980s, a wonderful women’s chorus named Libana sang a song with a striking line in it, “I am a child of the Universe.” As you enjoy the geese and the cardinals and the goldfinches, and seek the brilliant white of the heads of soaring eagles, pause and see if you too don’t feel like a child of the Universe!

5 responses to “The Wonder That a Feather Is”