The Magic of Butterfly Wings

From spring to fall, if you’re lucky, you can revel in the sight of butterflies. They can be found in gardens, in the woods, in meadows—anywhere where there is sunshine and where they can forage for the nectar produced by flowers. Here, for example, is a painted lady (Vanessa cardui) sampling the nectar produced by the flowers of a rhododendron bush in our front garden. 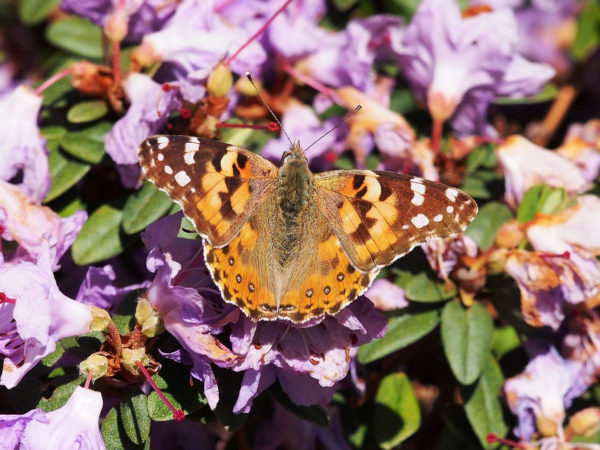 And below is another painted lady, perched within a thicket of Himalayan blackberry (Rubus armeniacus). Its wings are folded so you see the underside. 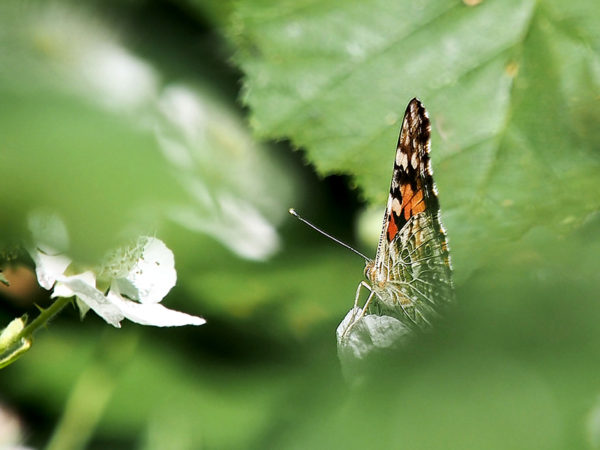 We have planted our garden to be attractive to insects, and butterfly visitors are among our rewards! Below is a red admiral (Vanessa atalanta) on a cluster of lantana flowers. As the Latin name indicates, it is closely related to the painted lady. 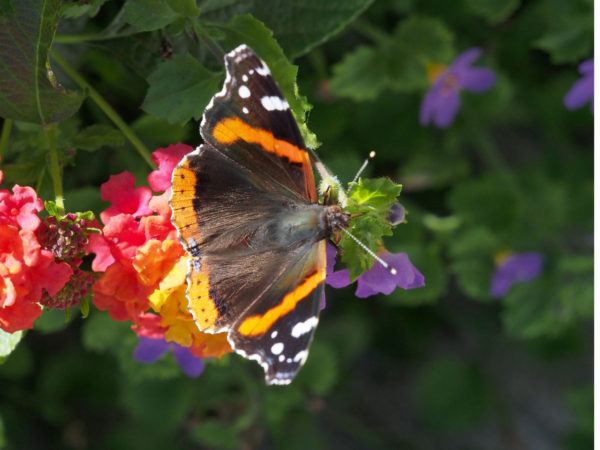 And below we see the same individual exploring the flowers from underneath. As in the case of the painted lady, the pattern on the underside of its wings is dramatically different from that on the upper side. 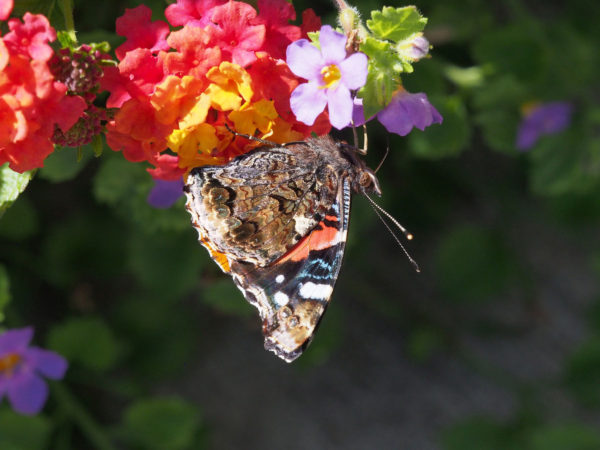 There is an enormous diversity in the wing patterns of butterflies and their relatives, the moths. Nonetheless, observant biologists have noted that many of these patterns also show common features. Let’s have a look, focusing initially on the painted lady and the red admiral.

Different as these patterns are, especially on the upper side, here is a minimum of what they share:

We see here the rudiments of a general pattern referred to by biologists as the nymphalid ground plan. (The Nymphalidae are a very large family of butterflies to which both these species belong.) The whole plan has more elements than these three, but we will keep our version as simple as possible.

Let’s see how the nymphalid ground plan manifests in another, more distantly related nymphalid species, the purplish fritillary (Boloria charicles.). The specimen below was photographed in the Olympic Mountains, feeding on pearly everlasting (Anaphalis margaritacea). 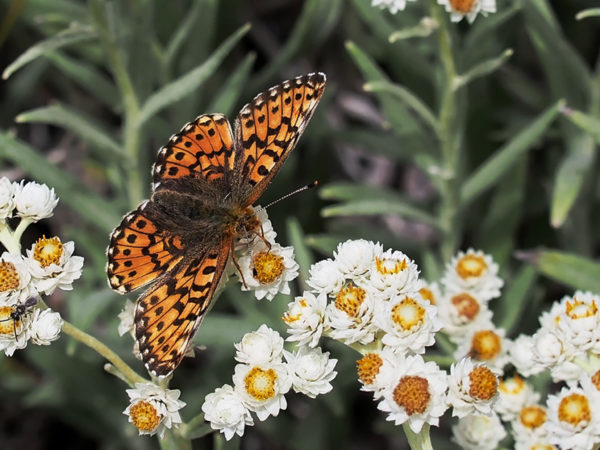 Once again we see front-to-back bands (this time several, not just one) and border spots. The wing cells are especially easy to see. Notice how the black bands, while continuous from front to back, are nevertheless broken up at the wing veins, indicating that they develop independently within each vein-limited cell.

Does the nymphalid ground plan manifest in species outside the family Nymphalidae? Yes, it does. Below is another example from our front garden. This is a pale tiger swallowtail (Papilio eurymedon) from the family Papilionidae. 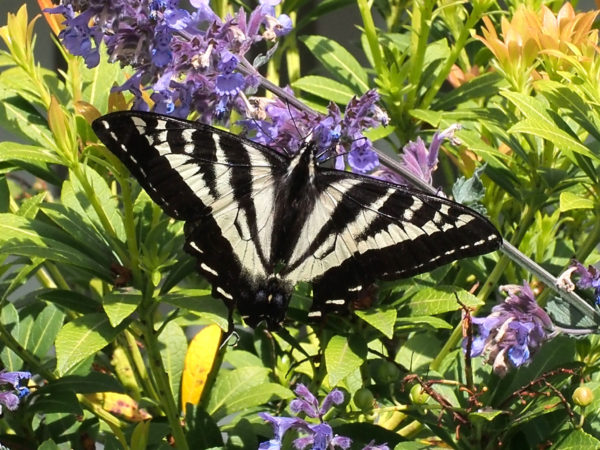 It’s very different from the fritillary, but again we can recognize front-to-back bands, small pattern elements along the margin, and vein-defined wing cells with which the bands and spots are associated.

Our small sampling reveals that, while the patterns on butterfly wings delight the eye with endless variations, these are not haphazard. Indeed, an extensive survey of species shows that the nymphalid ground plan is recognizable among virtually all butterflies and moths, a fact first documented by German and Russian biologists in the 1920s. You can find a more detailed account of the plan, together with compelling animations demonstrating how variations on it can arise, here. It is the work of Professor H. Frederik Nijhout at Duke University.

Not all aspects of wing coloration are, however, a manifestation of this ground plan. For example, the ripple patterns on the undersides of the wings of the painted lady and the red admiral are an added feature, as are the black bands associated with the veins exhibited by this pine white (Neophasia menapia, family Pieridae) perched on the tip of a hemlock branch in the Sol Duc Valley of the Olympic Mountains. 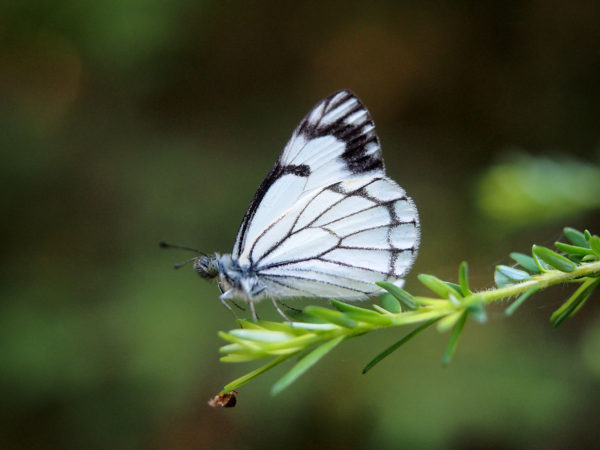 How Do Butterfly Wings Get Their Colors?

Thus far, we have simply accepted that butterfly wings are strikingly colored, and have focused our attention on the patterns into which the various colors are arranged. But where do the colors come from in the first place?

The colors in butterfly wings are generated within tiny scales extruded by single wing cells. These scales lie flat to the surface of the wing and are partially overlapping, somewhat like the shingles on the roof of a house. It is hard to see individual scales without having a wing in hand and looking at it with considerable magnification, but the picture below will help.

This is a magnified view of the earlier photograph of the underwing of a red admiral. Notice the many white and blue speckles. Each of these is a single scale, produced during development by a single cell.  The texture of the larger colored areas often has the feel of a tapestry because the color results from many individual scales. You can find some beautiful, magnified images from other species here. 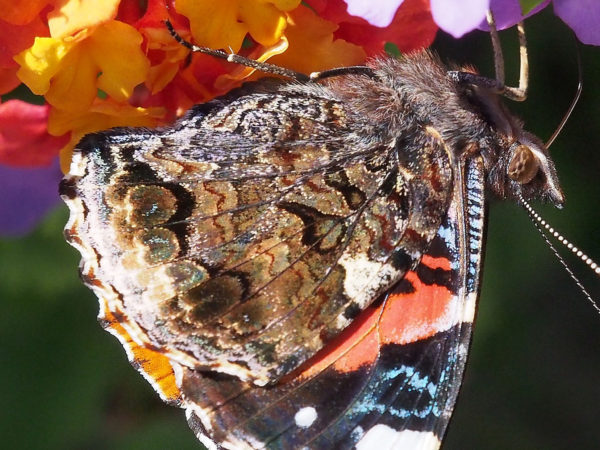 Where does the color in each scale come from? There are two sources:

The dramatic patterns shown by the wings of butterflies vividly illustrate the general question of how patterns arise during the development of an organism. To appreciate the challenge of this question, look around you. Every organism you can see with the naked eye arose from a single microscopic cell. Yet, now it is made up of vast numbers of cells, often millions, billions, or even trillions. All of them contain basically the same set of genes, yet they synthesize different molecules, display a diversity of anatomies, serve different functions, and form different tissues and structures.

How can this be? In the case of butterfly wings, how does it come about that some cells synthesize a black pigment (melanin, also synthesized by mammals) while nearby ones synthesize a red or orange one (a member of the ommochrome or pteridine families of pigments, also found in the eyes of insects) even though both the black and the orange cells contain the same genes? How does it come about that the cells synthesizing the bright orange-red found in the wing of a red admiral are arrayed edge-to-edge in a band, and not simply scattered around the wing surface? By what mechanisms are the often very different patterns on the upper side and the underside of the same wing generated? How does the wing get its overall shape?

These “how?” questions asked by developmental biologists are endless and difficult, but we do have increasingly sophisticated answers to them. In a future post I will try to explain at least the direction that experimental studies are taking. And notice that we haven’t even touched on the “why?” questions asked by natural historians, ecologists, and evolutionary biologists, starting with why do butterflies make such huge, delicate, elaborately patterned, and diverse wings in the first place? Biology truly presents us with an ever-expanding domain of inquiry!

Nature is filled with forms exhibiting both diversity and similarity. In all organisms the complex form we see develops from a single cell. As you walk outside, look at any array of plants or animals and make a mental note of features you see that are similar in individual specimens and ones that are different. You may want to ask yourself, what ideas offered on Nature’s Depths so far help explain the similarities? And what about the differences—how might they arise? Asking questions about what may lie behind the world you observe through your senses will prompt you to pay closer attention, and your experience of nature will be enriched!

12 responses to “The Magic of Butterfly Wings”