The Brush Dances, the Light Sings, and the Bumblebees Play

In this post, I would like both to offer some important personal news and to introduce an enriched perspective on living beings.

Close to a year ago, on December 27 of 2021, I asked the followers of Nature’s Depths to be patient with me while I worked on two books honoring my beloved wife, Yvonne, and the life we lived together for sixty years: a memoir called The Journey Together of Johnny and Yvonne as Seen through Johnny’s Eyes and a coffee table book combining Yvonne’s paintings and my photographs, all devoted to nature, called The Brush Dances and the Light Sings.

You have indeed been patient, and for that I am very, very grateful. This past year, I have prepared only a single post, a Rumination called The Egret, the Photographer, and the Universe. Today, I want to share with you the outcome of this pause—The Brush Dances and the Light Sings is complete, beautifully printed, and available to anyone who might want to have or to give a copy!

Here is the book’s cover painting. It was one of Yvonne’s favorites and I have posted it previously on Nature’s Depths. She called it Autumn Glow. 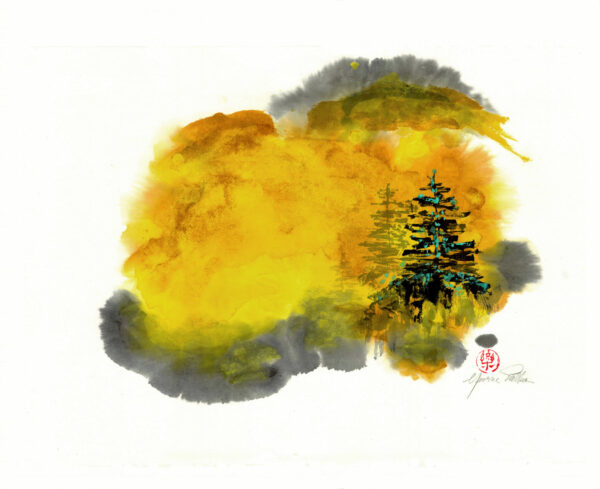 This is the way the book opens.

The book you are holding presents a selection of paintings by my beloved wife, Yvonne Palka, interwoven with my photographs. It is an expression of our love of beauty and art, of our devotion to nature, of our spiritual search, and of our shared journey of sixty years. . .

I have sought in these pages to bring together those of Yvonne’s paintings that most express her warm, joyous, loving, and uplifting spirit. I complement these images with photographs that resonate with the paintings in one way or another—sometimes in form, sometimes in color, and always in spirit. Yvonne is no longer here to lend her physical voice, but the spirit that first imagined such a project has continued to be with it ever since.

What does it mean for a photograph and a painting to resonate? Here is an example, the opening pair in the book. 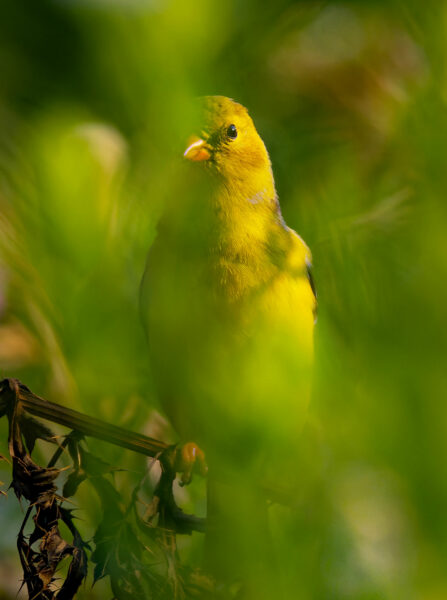 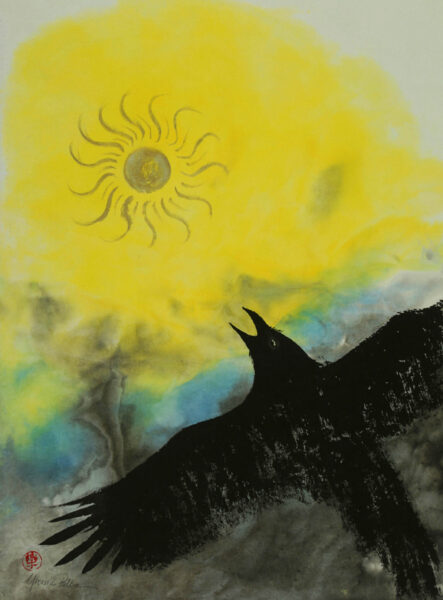 The book provides a brief text about how Yvonne and I viewed and experienced our work. Its body, however, is fifty of Yvonne’s paintings and fifty of my photographs, fully as resonant with each other as are these two.

I am very gratified that all the people who have seen The Brush Dances and the Light Sings have loved it and been amazed at the quality of the overall design and the printing. Should any of you readers of Nature’s Depths be interested, here is the buying information:

a) Directly from the publisher, Kirk House Publishers (my preference).

Now let us turn to something quite new—the inner lives of some very important members of the community of organisms on the Earth, bumblebees.

We have encountered bumblebees before, notably as major pollinators. We have seen how they collect the nectar that flowers produce and that the bumblebees use for food (The Intimate Life of a Hollyhock Flower and A Banquet for Butterflies and Bumblebees), and we have also learned about the role of the electrical field of the whole planet in the way that bumblebees pick up pollen from one flower and transfer it to another (Connected with Planet Earth).

Today we will look at bumblebees from a different perspective, contemplating a recently-published study that examines not the role that they play in life on Earth but rather their inner life—specifically, the concept that bumblebees like to play!

This study has attracted considerable attention, including a report on National Public Radio. The title of the NPR report is “If bumblebees can play, does it mean they have feelings? This study suggests yes.” Do bumblebees really play in at least somewhat the same sense as children play? When bees play, do they have feelings—do they really have fun while they play? And how would we ever know?

In fact, why would anyone even ask that question? Dogs, yes, but bumblebees? A bee’s brain is smaller than a pinhead. Bee activity seems to be devoted to the difficult and time-consuming work of searching for and collecting food for themselves and for their brood, as you can see again in these pictures. 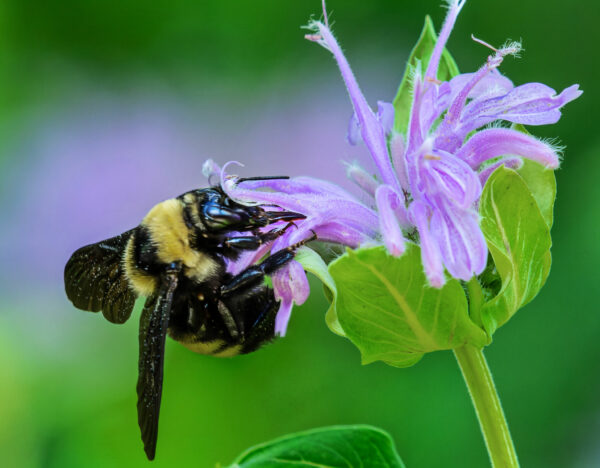 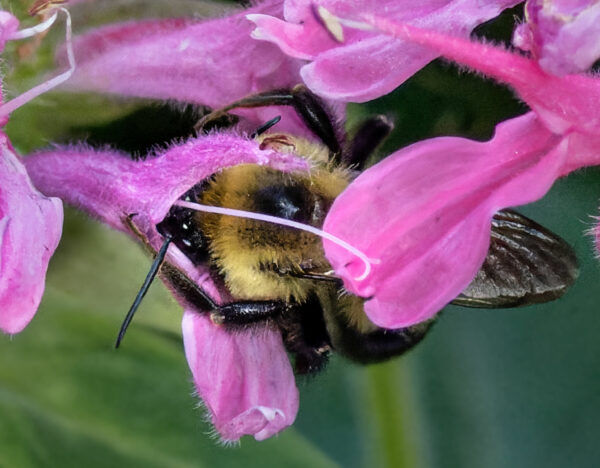 It turns out that wondering about play is not new in the Western academic world. As early as 1896, the German philosopher and psychologist Karl Groos published a book titled Die Spiele der Tiere; it came out in English in 1898 as The Play of Animals. Groos argued for the interpretation that play in animals definitely exists because it is evolutionarily useful—it is a safe way of practicing behaviors that support survival. Contemporary thought tends to go beyond this utilitarian perspective, but Groos’s work illustrates the kind of attention that play received from scholars even a century ago.

Most studies on play have focused on mammals and birds, and information on play in insects is sparse. On the other hand, studies on insect intellectual capabilities—for example a numerical sense—have been proliferating in recent years. One such study was done in the laboratory of Prof. Lars Chittka, a German biologist working in England. Here is a description of what Chittka’s team noticed that led to the new study on play.

In a previous study it was found that bees can be trained to roll balls to gain access to a reward. During the execution of this experiment, the team observed that bumblebees would often roll balls for no apparent benefit. Between experiments, balls were placed in the tunnel that connected the hive to the arena that contained the food. Despite there being enough space to avoid the balls, bumblebees often seemingly unnecessarily walked over and rolled balls on their way to and from food. This observation provided the motivation for the present study . . .

In other words, bumblebees that could easily have walked to where sugar water awaited them would instead make a detour and spend time rolling balls! Keen observation and ongoing curiosity led to new investigation. That’s the way so much science works!

The new study in the Chittka lab basically repeated the prior observations in a more systematic and quantitative way. It found, for example, that younger bumblebees spend more time rolling balls than do older ones, and young males more time than young females. The basic observation suggesting that ball-rolling constitutes play is best understood through the short video that is included in the NPR report. Please click on the video, watch, and enjoy (all the way through)!

And what did the playing bumblebees feel like? Did they feel at all? These are questions to which we do not have clear answers but to which major attention is being given. Prof. Chittka recently published a book titled The Mind of a Bee. His closing paragraph is a good example of the ideas that are circulating and giving rise to ever-more creative studies.

The challenges of survival and self-replication [reproduction] that a moving organism faces are most efficiently met when brain and body are intimately connected, enabling the organism to know itself as distinct from non-self and to predict at least the immediate future, in part from knowing its own intentions. In this view, an elementary form of consciousness may have come into being at the roots, not at the endpoint, of animal life.

Prof. Chittka’s book has an afterword in which he explores the implications that possible bee consciousness has for the way we humans treat bees. Here is the potent closing of the afterword.

The assessment of pain and emotional states in animals is a moral obligation in deciding on strategies for animal welfare, for domestic animals and those hunted in the wild, as well as for animals used in laboratory experiments. However, current legislation in most countries places no limits on the treatment of invertebrates [animals apart from fish, amphibians, reptiles, birds, and mammals], on the assumption that they do not experience pain or emotions. This means that lobsters can be cooked alive in restaurants, and that tethered insects can be subject to invasive neurobiological procedures in the laboratory without anesthesia or analgesia. Indeed, there is no requirement to apply for a permit to ensure that the research is conducted with due consideration of the numbers of animals used, the severity of the experimental treatment, or the possible benefits to science or humanity . . .

And if you are still not swayed that bees have such experiences—and that this is an important argument for their conservation—then remember that we still need them to pollinate our crops, that the candles made from their wax have illuminated scholarly efforts through the ages, and that the harvesting of their honey might well have provided the necessary carbohydrates for our ancestors’ costly brain enlargement, and might thus have fueled the evolution of the human mind. We owe the bees. Act accordingly.

Work like this does not provide definitive answers to the biggest questions, many of them thousands of years old, about experience and consciousness in animals other than humans. It does, however, provide refined lenses through which these questions can be examined in ever-greater depth. It prompts us to ponder what might be behind our observations of a whole range of phenomena and which of our long-held assumptions ought to be re-examined. I invite you to do just that as you savor the world of nature—our world. Ask yourself, what’s behind the surface and which of my often unconscious assumptions should be re-examined? 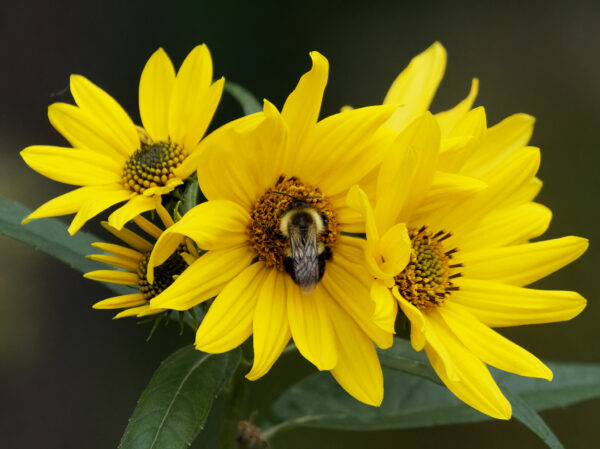 20 responses to “The Brush Dances, the Light Sings, and the Bumblebees Play”