The Breath of the Forest

I like to think of the forest as not only teeming with life, but also as breathing. Let me explain what I have in mind.

In the post How Green Is My Forest, we were introduced to photosynthesis, the great process that captures energy radiated by the Sun and uses it to make sugars here on Earth. These sugars sustain the life of most our planet’s organisms. A byproduct of photosynthesis is oxygen, O2, the molecule on which so many forms of life depend. The Earth’s atmosphere has an abundant supply of oxygen only thanks to the photosynthesis carried out by the plants of the land and the plankton of the sea.

We considered as well the process of cellular respiration. In respiration, sugar molecules are disassembled, and the energy that was stored in them when they were synthesized is now used to carry out many life processes, including the contraction of muscles; the various electrical activities of nerve cells; and the construction of the complex molecules of which living cells are composed, such as proteins, fats, complex carbohydrates, and DNA. In these processes oxygen is used and carbon dioxide is released, only to be reused in photosynthesis.

So, photosynthesis and respiration—operating in a cycle driven by solar energy—are mirror images of each other:

Here is a way to appreciate this grand, sun-driven pair of processes. Imagine taking a walk in the forest during the day. All around you the leaves of the green plants will be trapping every bit of light they can, and storing the light’s energy in the sugar they make. At the same time—and as a part of the same set of biochemical reactions—they will be pouring out oxygen. If you walk through the forest during daytime, you will breathe in air enriched in oxygen. 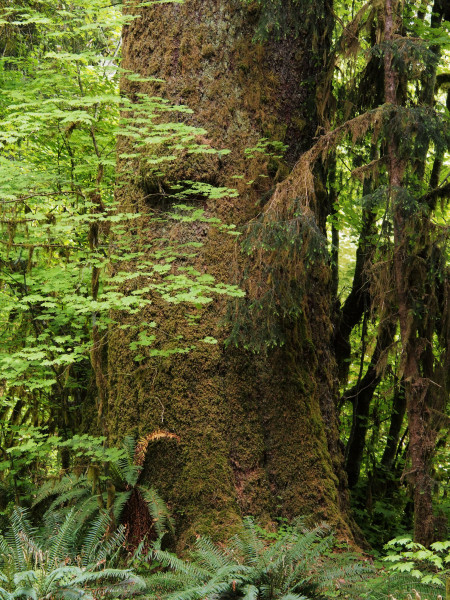 Walking in the same forest at night is very different. If there is enough moonlight that you don’t need a flashlight, and if the trail is soft enough to go barefoot, the experience can be magical. Your senses are heightened, the fragrance of the forest is extra rich, the breeze feels alive on your skin. And, you are surrounded by plants whose life is not quite what it was during the day. 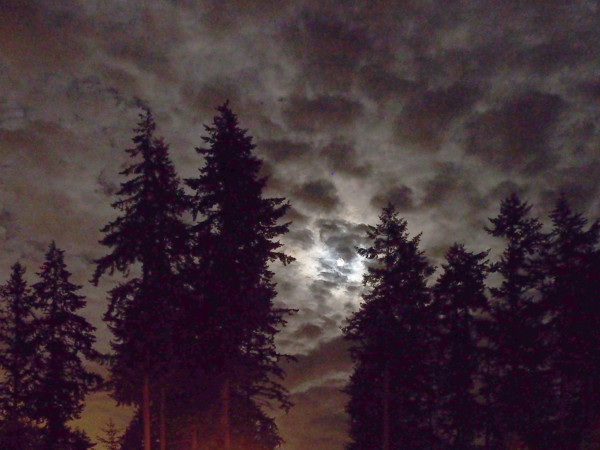 At night, of course, there is no sunlight, and the moon does not provide enough light to drive the reactions of photosynthesis. Essentially no oxygen escapes from the leaves, and so the forest air is no longer enriched in this gas that is essential for our own life.

With no photosynthesis, not only is no oxygen being released, but also no sugar is being made and no new stores of transformed solar energy are being generated. Nonetheless, the trees, bushes, and the delicate greenery of the understory all require an uninterrupted supply of metabolic energy to sustain their lives. Where does this energy come from? From the sugar these same plants made during the daytime and stored within their cells, either as the original sugar or as starch, a more compact form of energy storage. To access this stored energy, the plants use oxygen and release carbon dioxide. In short, they carry out cellular respiration pretty much like animals do. The entire cycle of photosynthesis and respiration takes place within the body of each green plant. The plant breathes in carbon dioxide and exhales oxygen during the day, and then does the opposite—breathes in oxygen and exhales carbon dioxide—during the night.

If we look a bit more carefully, however, we will see that plant photosynthesis and respiration are actually not entirely separated by the daily light/dark cycle—during the daytime they coexist. Remember, photosynthesis only takes place where there is chlorophyll, i.e. in the green cells of the leaves or needles. What about the rest of the plant—the stems, the roots, all the living cells that do not contain chlorophyll? They get sugar from the chlorophyll-containing cells. In fact, even the cells that photosynthesize also respire! You might say that the plant feeds itself the food that it itself has made, so that every one of its living cells can generate metabolic energy day and night without interruption.

Now, another perspective. I originally wrote this post in the Pacific Northwest, a region noted for trees that are green all year round. Many trees, however, are not evergreen; they are deciduous. As you can see in this photograph from my winter home in Minnesota, they drop their leaves during the winter and go for several months at a stretch without any possibility of photosynthesis. How do deciduous trees and bushes get the energy they need to maintain life during the winter? Just as they do on a summer’s night. When their leaves are gone, deciduous trees rely on cellular respiration, disassembling the reserves of sugar (mainly in the form of starch stored in the roots) that they accumulated during the bright days of the year. They use this stored energy to drive all the diverse processes of life. A bear stores fat for the winter, a plant stores starch. And, as we will see in another post, in really cold weather both of them can reduce their demands for metabolic energy, and thus for food, dramatically. 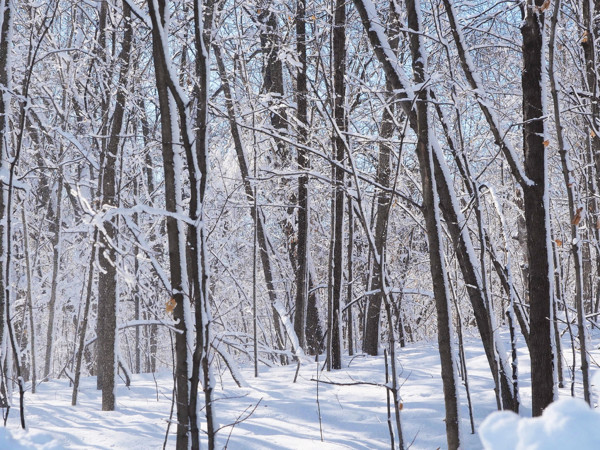 While its trees have their leaves, a deciduous forest, like an evergreen forest, reverses its breath on a daily cycle. During the day, while photosynthesis works faster than does cellular respiration, a deciduous forest primarily breathes in carbon dioxide and exhales oxygen. During the night, when photosynthesis stops but cellular respiration continues unabated (not only in green plants but also in the myriad other organisms that compose the forest ecosystem), the forest breathes in oxygen and exhales carbon dioxide. Once the leaves are gone, however, it only breathes in oxygen. At that point, it no longer matters whether it’s day or night—the trees respire without photosynthesizing. They always take in oxygen and release carbon dioxide, just like you and I do.

Go out into the forest and imagine it breathing all around you. In your mind, meld your own breath with the breath of the forest. And try it at night, as well as in the daytime!

14 responses to “The Breath of the Forest”