We humans are extremely visual creatures. Vision is such a dominant part of our lives that it often serves as a metaphor. We say, “I see,” to express not only an immediate sensory experience but also deep understanding. We usually say, “It’s great to see you again,” even when what we really mean is “It’s great to be with you again.” The list of such figures of speech is very long indeed.

Sensitivity to light is so universally useful that many kinds of animals have evolved eyes. The structure of the eyes of diverse animals, however, varies considerably, and with this variation come differences in what information about the world the eyes can capture and convey to the brain. Thus, the role of vision in the lives of different animals cannot be assumed to be similar to our own experience. Let’s look at some examples.

The vertebrates are the groups of animals that are the most similar to us. They include fishes, amphibians , reptiles, birds, and of course other mammals.

All vertebrates have eyes of the same basic design. For example, here is a green frog (Lithobates clamitans, Family Ranidae) surrounded by duckweed in a pond close to our house in Minnesota. The eye with its black pupil and golden iris is prominent. The disc just behind it is the ear. 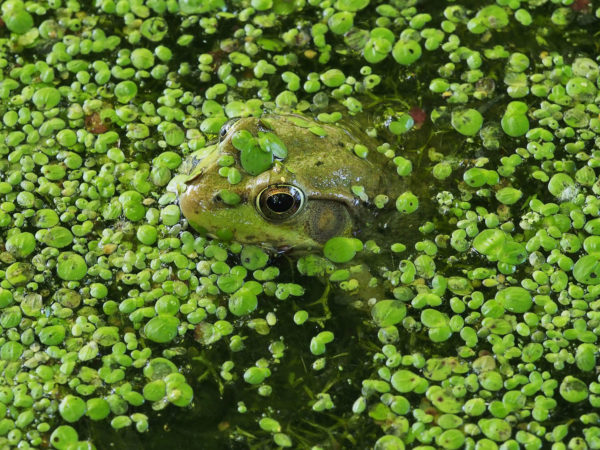 Below, the photograph has been cropped to show the eye in greater detail. 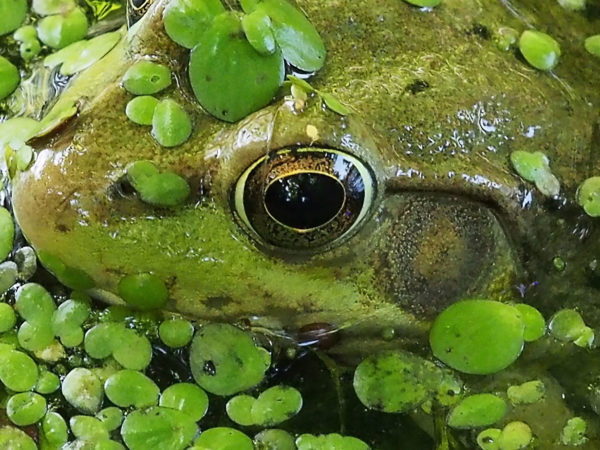 Below is the head of a bald eagle (Haliaeetus leucocephalus, Family Accipitridae), photographed at the National Eagle Center in Wabasha, Minnesota. Again the eye is prominent, and is marked by a black pupil surrounded by a colored iris. 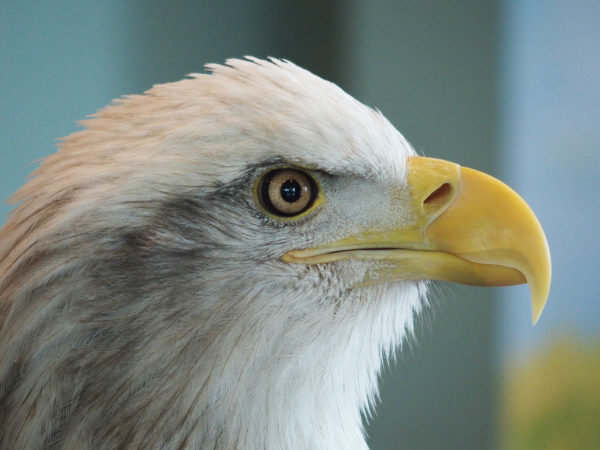 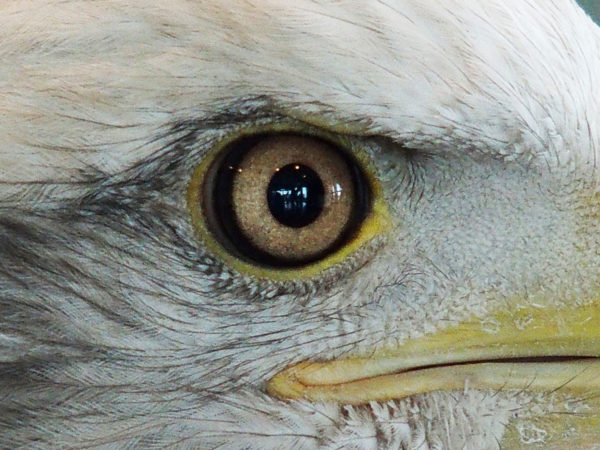 Here are the principal structural features of vertebrate eyes:

Visual signaling in the retina starts in a layer of photosensitive cells, the rods and the cones, that generate electrical signals in response to changes in the amount of light that strikes them from moment to moment. These signals pass through three layers of nerve cells that process them and, finally, produce streams of impulses that travel along nerve fibers in the optic nerve all the way to the brain. These impulses inform brain cells about what is happening in the illuminated world around the eyes. It’s up to the brain to interpret these streams of impulses and create visual experience.

In short, vertebrate eyes have a single pair of optical elements that form a single image that is projected onto single retina. They are often known as camera eyes. It is a good analogy. The cornea and lens correspond to the complex lens of a camera, and the retina corresponds to the film or, nowadays, to the semiconductor sensor. The rods and cones of the retina correspond to the pixels of the sensor. The iris corresponds to the diaphragm of the camera. The interior of the eye is black just like the interior of a camera and for the same reason, to minimize light scatter.

The eyes of insects, crabs, and many of their relatives in the phylum Arthropoda are built very differently from vertebrate eyes. Look at this dragonfly, an autumn meadowhawk (Sympetrum vicinum, Family Libellulidae), photographed at the Eastman Nature Center on the outskirts of Minneapolis. Here is the whole insect. 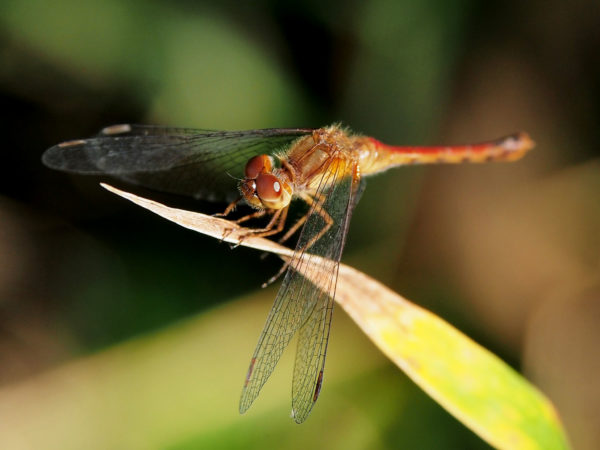 Below is the same photograph cropped to show more detail in the eyes. 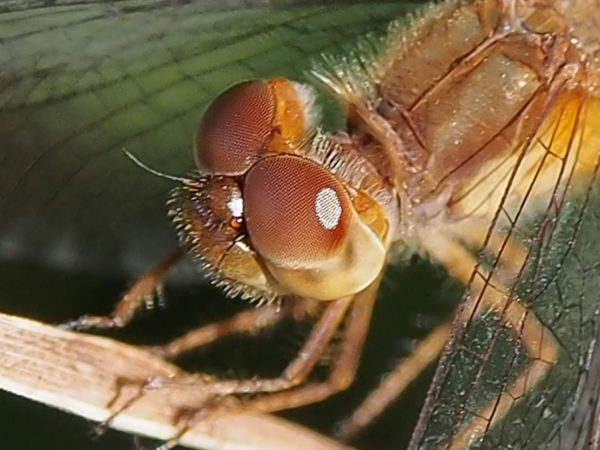 Like vertebrate eyes, arthropod eyes are covered by a cornea. The white, oval spot you see on the lower eye of the dragonfly is a reflection of the sun from that eye’s cornea. There are, however, many important differences between arthropod eyes like this and vertebrate eyes. These arthropod eyes have no single lens, no iris, no pupil, and no retina at the back. How can they even function as eyes? Yet, dragonflies are fierce and highly successful hunters. They capture small insects on the wing at high speed and with extraordinary accuracy, and they are guided in this prey-capture behavior by their eyes. Clearly, their eyes may be different from ours but they work extremely well.

The key difference visible from the outside is that instead of a single, large lens these eyes have a whole array of tiny lenses. For this reason, they are called compound eyes. You can see the tight pattern of such lenses in the photograph above, but they are much clearer in the picture below. This is a photograph of the cornea of the eye of a red rock crab (Cancer productus, Family Cancridae). The eye is situated on an extremely short eye stalk. The specimen is not a living crab but a molt that had been tossed up on the shore in Washington state. 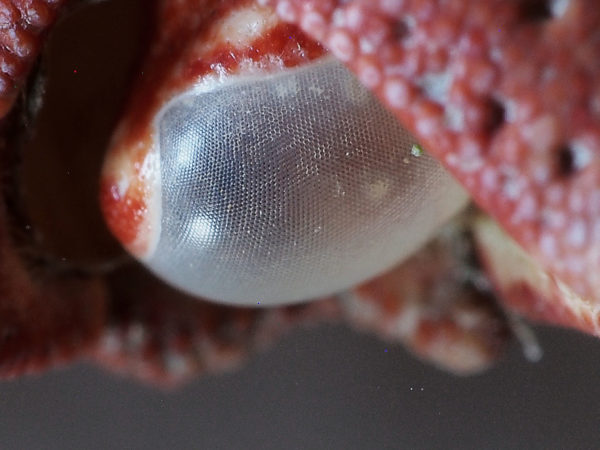 Below, once again, is the photograph cropped to show more detail. 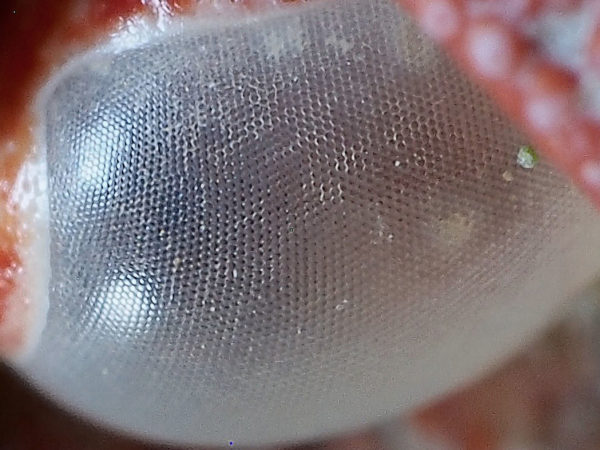 The appearance of the cornea varies with the angle of view and is quite instructive. In the two bright areas on the left, where the surface is seen in a glancing view, you can recognize that the cornea is formed of an array of tiny hexagonal facets. Each facet functions as an independent lens. Closer to the center of the eye, you are looking directly through each facet, through each tiny lens. In the molt there is no tissue behind the cornea, so you just see black.

If this were a living eye stalk and not a molt, behind each facet would be a tight, cylindrical array of cells, including central cells sensitive to light and, surrounding them, a sheath of cells containing black pigment. This arrangement is analogous to the rods and cones and to the black pigment cells of vertebrate camera eyes. Thus, behind each facet is what amounts to a separate micro-retina. As in all eyes, the role of the black pigment is to absorb stray light.

In large compound eyes there can be thousands of these microretinas behind thousands of corresponding corneal facets. Each one of them looks at the world from a slightly different angle. It is the job of the brain to assemble the electrical signals coming from all these different views into one coherent picture which the animal can use to guide its behavior. The necessary neural computation is a huge job, but in principle it is not different from a vertebrate brain assembling the signals coming originally from millions of rods and cones.

In short, compound eyes analyze the visual world differently than do camera eyes, but they serve the animals that have evolved them extremely well.

OTHER EYES WITH SINGLE LENSES

Snails, slugs, and octopuses are all members of yet another phylum, the Mollusca. Not all molluscs have eyes—clams and mussels, for example, do not, though scallops do. Octopuses, squid and their closest relatives have elaborate eyes that basically follow the camera design, but do so differently than do vertebrate eyes. Slugs and snails have much more rudimentary eyes and will serve as our final example.

Below you see one of the famous banana slugs of the Pacific Northwest, Ariolimax columbianus (Family Ariolimacidae) in the rainforest of the Olympic Peninsula. It has two sets of tentacles, both of them highly mobile and laden with sensory receptors. The upper tentacles each have a tiny black spot near the tip. These black spots are the eyes. 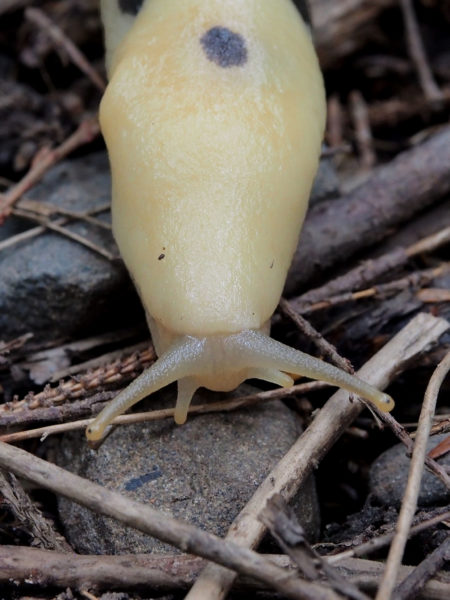 Here is a close-up view, this time not of a native banana slug but of an invasive European garden snail, Helix aspersa (Family Helicidae). 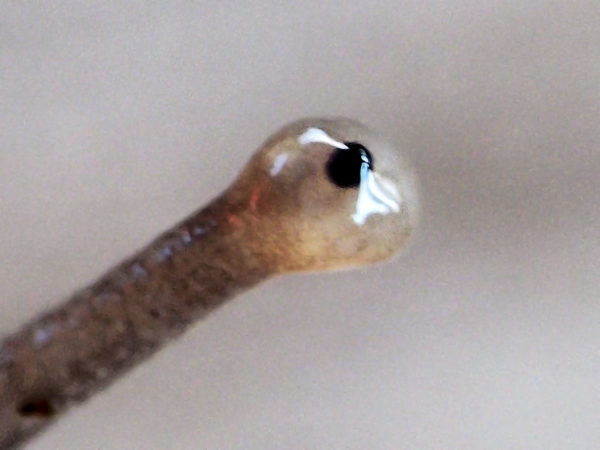 Each eye is situated immediately underneath a thin, protective tissue layer that is moist and transparent. A tiny, spherical lens fills the eyecup and concentrates the light onto the retina at the back. The usual black pigment layer in back of the retina keeps light from scattering inside the eye. Finally, the optic nerve passes through the full length of the tentacle to connect the photoreceptors of the eye to the snail’s brain.

The visual capabilities of different snails vary, and those of garden snails are particularly poor. They primarily detect different levels of light in the environment, not the details of objects.Nevertheless, their eyes allow these snails to distinguish bright areas from dark ones, and thus to glide toward shade and shelter. For a slowly moving, grazing herbivore, even this rudimentary detection of the pattern of light in the environment is helpful and serves as an aid to survival and reproduction.

For a moment let’s think about how this hypothesis about what the eyes of slugs and snails can see might be tested. A simple experiment would be to catch a snail or a slug, place it in a moist enclosure, and arrange for that enclosure to have a white card at one end and a black one at the other end. If the animal consistently moved either toward the white or toward the black card, you would have at least preliminary evidence that it could tell the difference from a distance. Try it!

LIVING IN A LIGHTED WORLD

Planet Earth is lit by the Sun. Almost all life depends on this light. Almost all organisms detect and respond to the light in one way or another. For animals, eyes analyzing an illuminated environment allow guided locomotion, the seeking of shelter, the capture of prey, social interactions without contact, and for us humans, the appreciation of art and the ability to read. Wonderful, isn’t it!

14 responses to “Seeing with Different Eyes”