Summer visitors to the mountains of the American West revel in their glorious flower meadows. Rambles through flower-strewn mountainsides are among the most exhilarating experiences that many of us have.

The brilliant, eye-catching, fragrant flowers that we so much relish have, of course, evolved independently of our enjoyment of them. Flowers are the sexual structures of their respective plants, and the hummingbirds and myriad insects that carry out pollination are partners in the dance of sexual reproduction. Biologists call it co-evolution: the flowers and pollinators have evolved together so that the plants can reproduce and the pollinators can find food, and sometimes also their own sexual partners. 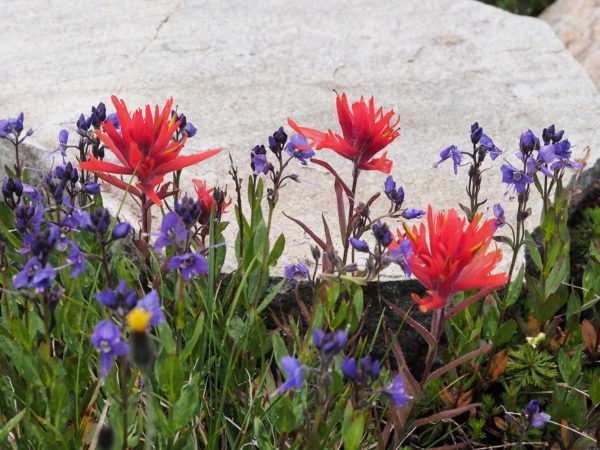 Before a complex organism like a plant or an animal can reproduce, however, it must first reach reproductive maturity. This requires an adequate input of energy and chemical building blocks. Plants acquire the necessary chemical energy by capturing the energy of sunlight, which is accomplished through photosynthesis that is carried out mainly in the leaves. Nutrients and water are absorbed primarily by the roots, most often with the help of associated organisms such as bacteria and fungi. In addition, maturation to the flowering stage can happen only if a plant has not been grazed excessively by herbivores, not only the familiar deer and rabbits but also a large diversity of insects and other creatures. In turn, plants have evolved defenses against grazing animals, often including the production of chemicals the herbivores find repellent.

The life stories of meadow plants beautifully illustrate these biological relationships, many of which take place underground. Let me tell you about two prominent plants of our western mountains—lupine and Indian paintbrush—individually and as partners. From those stories we can draw some general lessons. Let’s start with lupines.

Many species of lupines are found in meadows, from sea level to the alpine zone above where the trees grow. Lupines are legumes (Family Fabaceae), like garden peas and beans. The special features I want to focus on are their relationship with specific soil bacteria, and their production of defensive compounds. 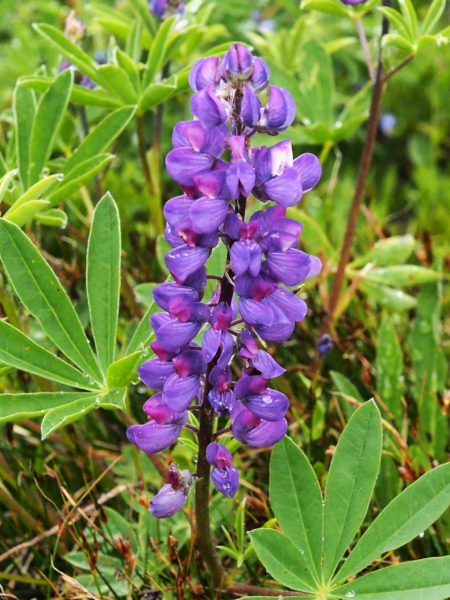 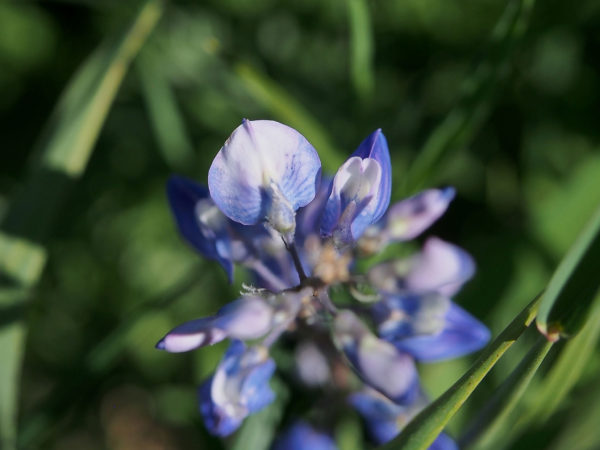 Making use of inert atmospheric nitrogen with the help of bacteria.

First let’s examine the special relationship that legumes, including lupines, have with a certain group of bacteria, and why this relationship is so important to ecosystems generally. Here’s how it works.

The atmosphere is very rich in nitrogen, approximately 78% by volume. Nitrogen gas, which is composed of two nitrogen atoms bound tightly together (N2), is extremely non-reactive, and in this respect is profoundly different from highly reactive oxygen (O2). Nitrogen atoms are, however, required by all living organisms, since they are constituents of proteins, DNA, and many other essential molecules. The only organisms that can convert molecular nitrogen—such as that found in the atmosphere—into biologically usable, nitrogen-containing molecules are certain bacteria and archaea that live in the soil and in water. This feat, called nitrogen fixation, cannot be accomplished by any protists, fungi, plants, or animals.

Thus, nitrogen-fixing organisms are essential to life on Earth. The contribution they make to plant life is particularly direct and efficient when they accumulate in special nodules that develop in the roots of certain plants. The whole legume family is rich in species that develop root nodules containing nitrogen-fixing bacteria, and lupines are no exception. A handful of non-leguminous plants, notably alder trees (Alnus sp.), also form root nodules, and grasses like sugar cane can host bacteria without forming nodules.

The nitrogen-containing compounds that bacteria make in a lupine’s root nodules serve more than just the host plants themselves. When a lupine’s leaves and stems die and decompose at the end of the growing season, these essential compounds leach out into the soil and thereby fertilize the entire meadow. When grazed by herbivores, whether above ground or below ground, even living lupines contribute usable soil nitrogen. We can imagine that the richness of flower meadows is partly due to fertilization of the soil by the beautiful lupines that live and die there.

There is a fascinating dynamic in the lupine-bacterial partnership. The soil ecosystem teems with a huge variety of bacteria, but only specific ones—species that can fix nitrogen— colonize root nodules. How does this selectivity come about? The explanation lies in a striking example of communication between species. The roots of legumes send out signaling molecules that attract the right species of bacteria to the root surface. Once the bacteria have arrived, they announce their presence by their own molecular signals. The plants respond by creating channels through which the bacteria can penetrate into the roots, and so on back-and-forth. The mechanism through which bacteria enter the roots of legumes appears to have important similarities with a much more ancient partnering mechanism, the one that allows mycorrhizal fungi to penetrate the roots of the vast majority of plants.

Here is the other special feature of lupines I want to highlight: like a wide diversity of other plants, they make defensive compounds that belong to a heterogeneous class of molecules that are collectively called alkaloids. Some potent alkaloids are very familiar to us, for example nicotine, caffeine, and morphine. Lupines make a whole variety of other alkaloids. They serve the plants as deterrents to grazing herbivores.

So, the beautiful lupines of our meadows host nitrogen-fixing bacteria and produce herbivore-deterring alkaloids. Both of these processes have wide ramifications. We’ll get to these after we introduce another conspicuous meadow plant, Indian paintbrush.

Indian paintbrush (Castilleja, Family Orobanchaceae) has green leaves, so it is capable of trapping the Sun’s energy and making sugars for its own use. In addition to obtaining energy in this way, however, it also sends its roots out to invade the roots of neighboring plants and draw nutritional and other molecules from them. Because Indian paintbrush uses both mechanisms, it is called a hemiparasite.

Indian paintbrush is quite indiscriminate as to which roots it invades. The main factor appears to be proximity, and any nearby roots will do. In the first photograph of this post, the candidate hosts for the paintbrush are the Veronica and the grasses. In the photograph below, we see paintbrush growing in a cluster dominated by lupines, and there is every reason to believe that the roots of those lupines have been invaded by the roots of the paintbrush, as well as those of the yellow colored lousewort (Pedicularis) which is also known to be hemiparasitic. 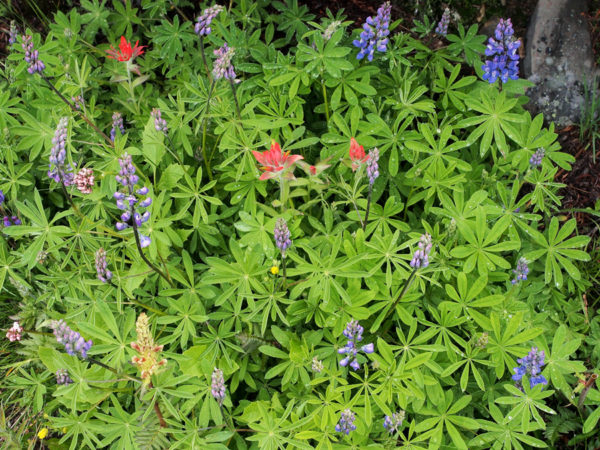 Inasmuch as plants like Indian paintbrush conduct their own photosynthesis, one might wonder how they benefit by being hemiparasitic. Here are some intriguing results that speak to this question from a study done in the Colorado Rockies on Castilleja miniata, a species with a very wide range that is also abundant in the meadows of the Cascades, and on the lupine Lupinus argenteus. The investigator took advantage of the fact that hemiparasitic plants take up from their hosts not only nutritional molecules but also a wide range of other chemicals present in the host’s tissues, including defensive alkaloids. In the meadows she studied, lupines were the only plants that produced alkaloids, and the alkaloids could be detected by a simple and reliable chemical test. Thus, it was possible to determine whether or not any individual paintbrush had included a lupine among the plants that it had parasitized. In this study, spanning three sampling sites and two years, the investigator compared a number of features of paintbrush biology in plants that had parasitized lupines and ones that had parasitized only non-lupine plants.

Here are the most salient results. (a) Paintbrush that parasitized lupines suffered significantly less grazing by herbivores, both by insects that specialize on paintbrush and by deer that graze indiscriminately. (b) Unlike the herbivores, pollinators were not affected by the lupine alkaloids present in paintbrush. (c) Paintbrush that parasitized lupines grew larger and produced more seeds than did those parasitizing only non-lupine plants.

These results suggest that not only do hemiparasites like Indian paintbrush gain nutritional support (basically sugars) from their hosts, they can also benefit from the protective chemicals their hosts produce. They are grazed less and grow larger, perhaps partly because of the reduced grazing. One also wonders whether the nitrogen-containing molecules in which lupines are extra rich because of their root nodules contributed to the increased growth of the paintbrush that parasitized them. The evidence in the study is consistent with this idea, but it was not tested directly. I should add that interactions such as these are very complex, and the results of one study do not necessarily generalize to all apparently similar situations. Nonetheless, the results vividly illustrate what can happen.

THE RICH AND COMPLEX LIFE OF MEADOWS

Our meadows are highly complex ecosystems. We respond emotionally to the beauty of their flowers, but much goes on that even the most attentive naked eye cannot perceive directly. The soil harbors all six kingdoms of life—bacteria, archaea, protists, fungi, plants, and animals. Their members interact with one another in complex ways. Among these myriad interactions are the associations of mycorrhizal fungi with the roots of their host plants, the selective invasion of the roots of some plants (notably legumes and alders) by nitrogen-fixing bacteria, parasitism and hemiparasitism among root systems, the browsing of roots by soil-dwelling herbivores, and the infection of roots by soil pathogens. The water required by plants is held in the soil, and their roots are able to actively search for it. The mineral nutrients that plants require are provided by the soil, usually with the aid of bacteria and fungi. All this has profound consequences above ground. It is essential for growth, and plays a role in the defenses against herbivores that plants deploy. Without successful growth to maturity there would be no flowers. Without flowers and their pollinators, there would be no next generation of flowering plants, and the meadows would be pale echoes of the glorious expanses we know today.

Once again we see that the living world, our world, is deeply interconnected. We ourselves are part of that interconnected system. Remember that as you enjoy the flowers!

2 responses to “Mountain Meadow Tales – From Roots to Flowers”