Fall is a wonderfully engaging season. The days are still long, though each one seems noticeably shorter than the one before. Sunshine prevails, the air is crisp, and the nights are starting to be chilly. The flowers in the garden are fading and setting seed, the squirrels are getting fat. And—most dramatic—the leaves on the deciduous trees are turning color.

North America is home to vast areas of trees that flame gold and red for several weeks in the fall. New England, the Canadian Maritime Provinces and Quebec draw visitors from far and wide, but brightly colored woods are also to be seen in the mid-Atlantic states and all throughout the Midwest of the United States, including where we spend our winters—Minnesota. Farther west aspens, alders, maples, and larches glow amidst the deep greenery of the coniferous forests. 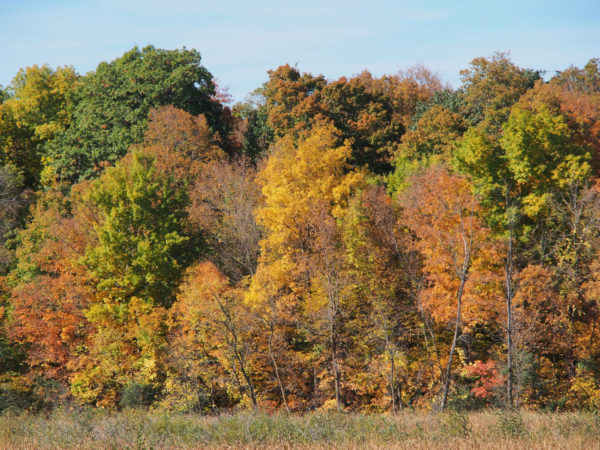 What happens inside the leaves, green all through the summer, that makes them turn a completely different color in the fall? Why does this happen just a few short weeks before the leaves drop altogether? And why do deciduous trees drop their leaves anyway, considering how difficult and costly in terms of metabolic energy regrowing those leaves will be in the coming spring?

Biologists have answers to questions like these, some quite precise and well documented, others rather speculative. Let’s explore some of these explanations as we take a walk through the autumn woods and explore the source of Nature’s leaf color palette.

The Green of Chlorophyll

As we have seen several times before on Nature’s Depths, the green of summer is due to chlorophyll, the pigment of photosynthesis. Below we will discover that the disappearance of chlorophyll in the fall, combined with the presence of other pigments, is what gives trees the brilliant colors that replace green as their leaves near the end of their lives.

The life history of chlorophyll molecules is a dynamic one. They are first synthesized in large numbers as leaves develop and expand in the spring. Their synthesis requires light, as does photosynthesis itself. However, light can also damage chlorophyll, so to maintain a steady concentration of this crucial pigment it is necessary for a certain amount of new synthesis to occur throughout the summer.

During the fall trees start to prepare for the winter. Part of this process entails recovering and storing valuable compounds for use by the tree during the cold and stormy part of the year. Just as important, these compounds will serve as a ready source of needed starting materials for new biochemical synthesis during the following spring. Part of what the tree does in preparation for this storage process is disassemble proteins into amino acids and complex carbohydrates into sugars. These smaller molecules are transported from the leaves to the branches, trunks, and roots where they are stored during the winter.

Like proteins and carbohydrates, chlorophyll too is disassembled, and its valuable components are stored. Disassembly is accomplished by a special set of enzymes that only appear during the fall. One of the biologically most important results of this complex disassembly process is the conservation of nitrogen within the tree, important because nitrogen is often a growth-limiting nutrient (that’s why nitrogen is such an important component of fertilizers). The more nitrogen a tree can store, the more ready it is to grow afresh in the spring.

During the magical time in the fall when gold and red replace the green of a deciduous forest but the leaves are still on the trees, the disassembled chlorophyll no longer functions as a pigment. This allows the presence of other pigments to be revealed through their own selective absorption of specific wavelengths of light.

Now lets look at how the specific colors of fall foliage arise.

Here are some sugar maples (Acer saccharum, Family Aceraceae) along a trail not from our house in one of the suburbs of Minneapolis. A few weeks earlier their leaves were green, now they are mostly golden. 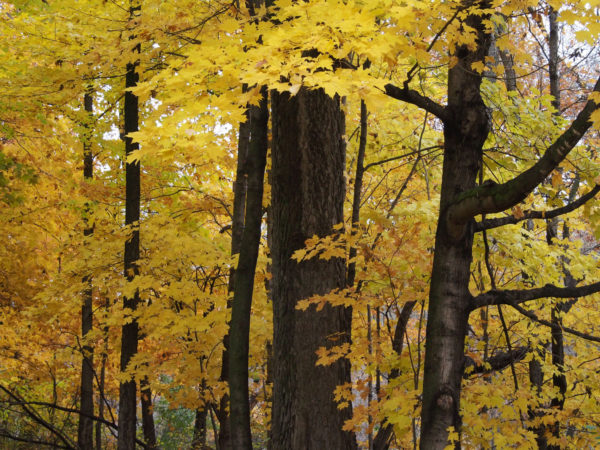 And here is the leaf of a red oak (Quercus rubra, Family Fagaceae) shining golden in the autumn sun. 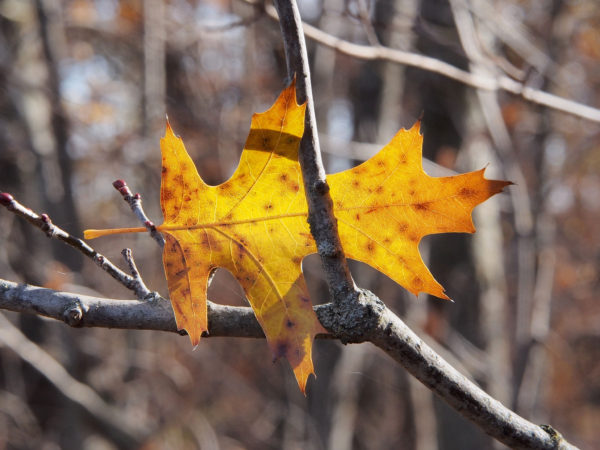 Here’s where the gold comes from.

In addition to chlorophyll, leaves contain carotenoids, yellow to orange to red pigments that play important supportive roles in the photosynthesis carried out by green leaves. The carotenoids extend the range of wavelengths that the leaf can use for photosynthesis. They also protect chlorophyll from the light-induced damage mentioned before. Finally, they protect other molecules from damage by toxic chemical products generated during photosynthesis. Thus, even though we generally do not recognize the presence of carotenoids in leaves during the summer while the level of chlorophyll is at its maximum, they play multiple important roles in photosynthesis.

The presence of carotenoids in leaves is revealed in the fall because these pigments are more stable than is chlorophyll—they are less likely to be damaged by sunlight, and they outlast chlorophyll by several weeks. During this time the leaves of many trees, with a rapidly diminishing supply of chlorophyll but a more slowly diminishing supply of carotenoids, look primarily yellow or gold. The specific pigment most often responsible for the yellow color of leaves is called xanthophyll. Orange leaves owe their color to carotene, another carotenoid. 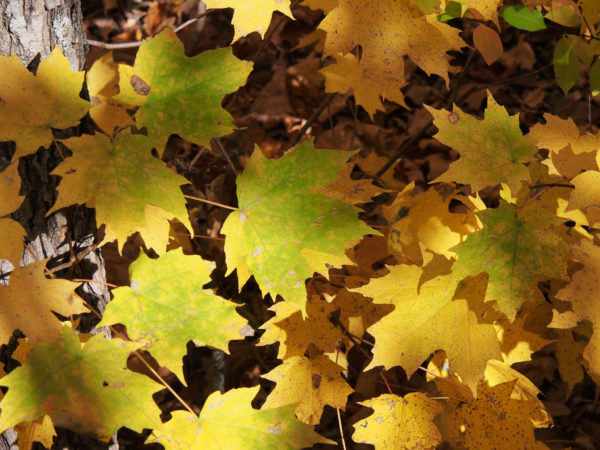 The loss of chlorophyll is neither sudden nor uniform. Some leaves on a tree turn before others do, and any single leaf turns only progressively. This photograph of maple leaves catches the process in action. 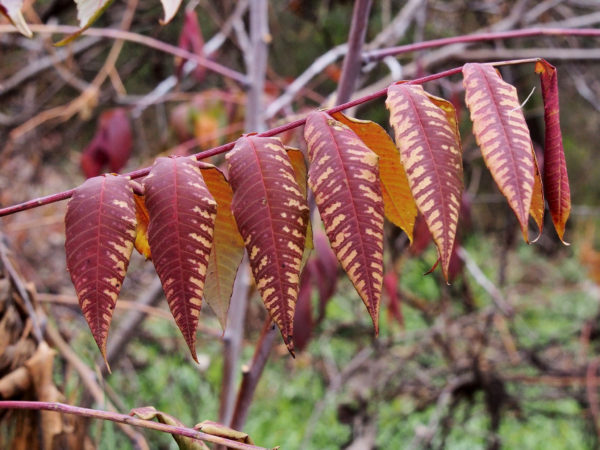 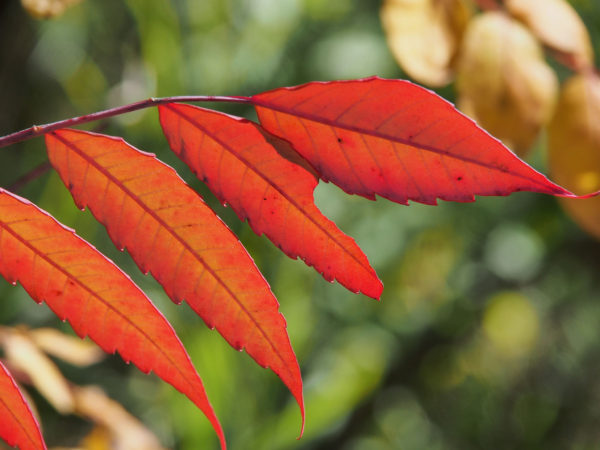 In addition to gold, the deciduous trees of autumn glow with purple and red, as in the smooth sumac (Rhus glabra, Family Anacardiaceae) seen in these photographs. Intense purples and reds like this are most often due to another class of pigments, the anthocyanins, though carotenes are sometimes also involved. The anthocyanins are a large and diverse group of pigments whose colors range from the intense blue of Scottish bluebells to the red end of the spectrum, depending on numerous factors including the exact structure of the specific pigment molecule and the acidity (pH) of the cellular interior. They are located in different parts of plant cells than are carotenes and can coexist with them.

While carotenoids are present throughout a leaf’s photosynthetic life, the prevailing view among plant biologists is that anthocyanins are primarily synthesized from scratch during the fall. Among the factors that set the synthesis of anthocyanins in motion are shorter daylength, cold nights, and an increase in the sugar levels prevailing within leaves.

Why does a tree invest precious metabolic energy into the synthesis of new leaf pigments just as the leaves are preparing for death? The answer is not unambiguous, but here are three among the several suggestions that biologists have made.

At the end of their lives, once chlorophyll and most of the carotenoids and anthocyanins have been degraded, most leaves turn brown. This is beautifully seen in the leaves of red and bur oaks (Quercus rubra and Quercus macrocarpa) in the picture below. 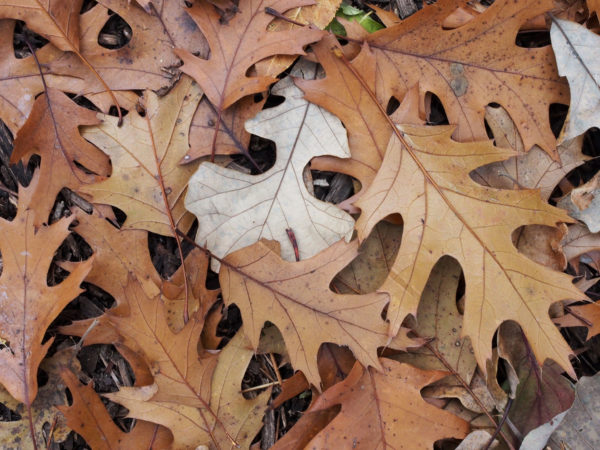 This characteristic winter color is due partly to some residual carotenoids but especially to the presence of yet another group of pigments, the tannins. Tannins are molecules that protect trees against insects and other attackers. They have been used by humans for centuries in the process of leather tanning. Tanning interlinks some of the molecules of which animal hides are made so that the hides become more supple and water-resistant—in other words, tanning turns raw hides into useful leather. When not masked by other pigments, tannins provide leaves with their gentle browns.

From the intensity of summer green, to the brilliance of autumn gold and red, to the subtle tones of brown as the life of leaves comes to an end, various pigment molecules synthesized by the cells of leaves are on display. Each of these molecules not only delights the human eye, it also serves a biological function. Chlorophyll is central to photosynthesis. Carotenoids play very important supplementary roles in photosynthesis, among them the protection of chlorophyll against excessive damage by sunlight. Anthocyanins probably play multiple protective roles. Tannins directly protect trees against insect attack. All these pigments combine in complex ways to produce the captivating autumnal displays that we know so well.