New Life on Our Doorstep

My wife, Yvonne, is a fine biologist and gardener, and she knows more about natural history than I do. She is also an especially attentive observer of what goes on around us. Let me tell you a story that she initiated.

It was April 20th of this year. We were sitting in our lovely three-season sun porch enjoying the coming of spring, I on the couch and Yvonne, opposite me, in her favorite gliding rocker. All of a sudden she exclaimed, “Look. There’s a duck on our railing!”

I turned around and, sure enough, there was a female mallard (Anas platyrhynchos, Family Anatidae) walking around on top of the railing of the sheltered, porch-like entrance to our little duplex in Maple Grove, Minnesota. We quickly walked over to my office, which is adjacent to the porch. Its blinds were lowered, so we could look out the window without disturbing the duck even though we were just a few feet away from her. As we watched, she flew down from the railing, examined the porch carefully, and then fluttered up to the big pot that Yvonne had prepared just the day before for planting some spring flowers. Here is the duck on the edge of the pot. 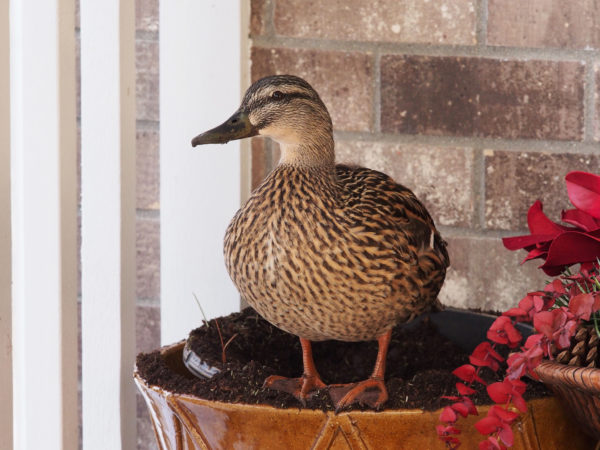 To take the picture, I had walked around the house to the front entrance. My walking slowly up the path toward the entrance didn’t seem to disturb the duck at all. After a few moments she nestled into the pot and looked around serenely. 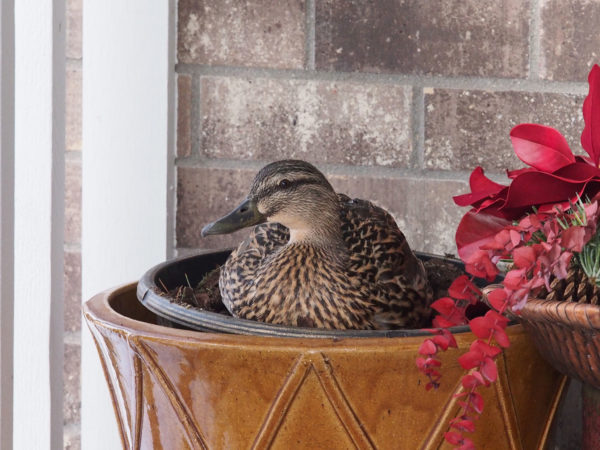 So, now we had a mother mallard apparently nesting right by the entrance to our house! We named her, simply, Mama Duck. 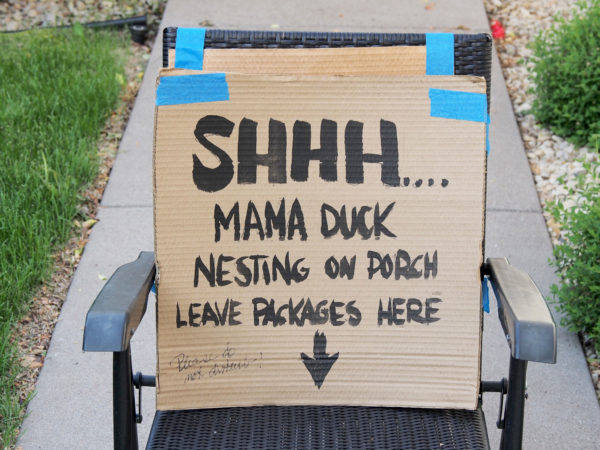 Since Mama Duck had taken up residence right by our front door, we promptly took measures to protect her privacy. 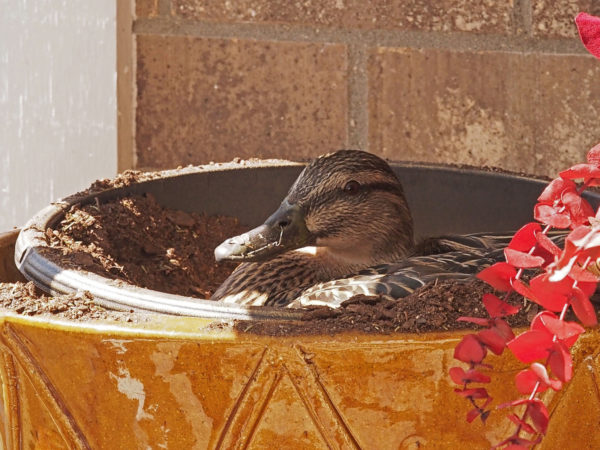 Mama Duck now rearranged the furniture in her house. Primarily, she scraped out a good bit of Yvonne’s potting soil, settling more deeply into the pot and leaving the soil scattered on the porch. She also started pulling some leftover plastic Christmas foliage that was next to the pot closer to her in order to create a bit of a screen. 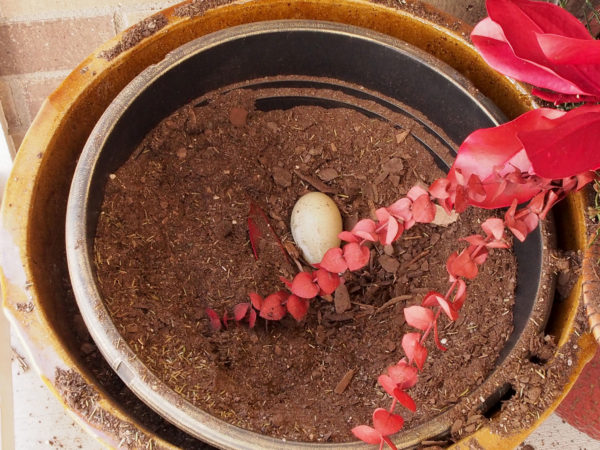 Soon, Mama Duck adopted a routine. She would be home for a few hours in the morning and then leave for the rest of the day, returning the following morning. When she did this again on the third day after her arrival, we took advantage of her absence to inspect the nest. Above is what we saw. It is unusual for female ducks to leave their eggs so exposed. They generally camouflage the eggs and often even partially bury them. As you can see in the pictures below, we never saw fully exposed eggs in Mama Duck’s nest again.

Why would a mother duck leave her precious, freshly-laid egg? Probably the main reason is that making eggs is an extremely energy-intensive process. When she was not laying, she was feeding in the nearby pond to build up energy reserves, both for additional egg laying and, later, for incubation when she would be sitting on the nest most of the day and night.

Doesn’t an egg get cold in the mother’s absence? Yes, it does. I come back to this point below.

For the next two weeks, Mama Duck laid an egg every day or two. As more eggs accumulated in the nest, she also added to their camouflage, using both the artificial Christmas foliage and fresh material. After laying her egg for the day, Mama Duck continued to fly away and return the next morning. She was on her own, as male mallards do not play a role in parenting, generally leaving the female and joining a male-only group. Every day Mama Duck improved the camouflage, and after a while she began to add downy feathers she plucked from her own breast. Once she started incubating, this insulation would help to keep the temperature of the eggs more stable while she slipped away to feed. 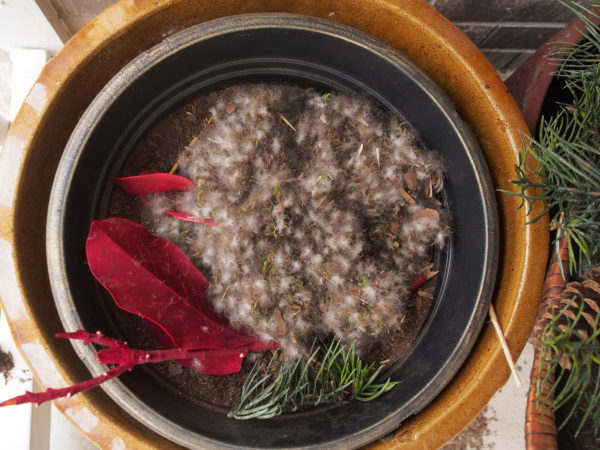 Within two weeks of when she had started laying eggs, Mama Duck had produced a clutch of nine eggs and had made a full protective covering for them. Now, it was a matter of incubation and of patient waiting, both for her and for us. 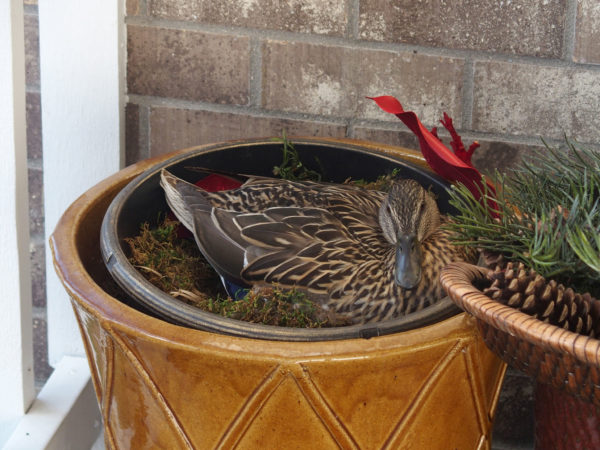 During the incubation period, Mama Duck was on her nest around 22 hours a day. She did take a short break during the afternoon, presumably to feed and drink. Her body was warm, so while sitting she transferred her heat to the eggs. The heat she generated came from her metabolism, driven by the plant food she ate. As we well know, the plants she ate had used photosynthesis to obtain the energy they required to build their own tissues. Thus, we can say without exaggeration that Mama Duck was solar powered! While she snuggled up against the eggs, the heat flowed from her warm body into the cooler eggs and raised their temperature. If the eggs ever got as warm as Mama was, heat energy would flow back and forth at equal rates.

What was happening during the incubation period? Ducks’ eggs may have a sculptural quality when seen from the outside, but inside those eggs life was springing forth. The single fertilized egg cell divided into two cells, those divided into four, those into sixteen, and so forth. This exponential process soon gave rise to literally millions of cells. Cells that were initially all alike started to become different from each other and, ultimately, gave rise to the diverse tissues and organs of the duckling.

Building a duckling’s body takes energy. The source of this energy is primarily the fat and protein molecules contained in the yolk that the mother deposits within the egg before forming the shell. Releasing the energy stored in these molecules requires oxygen. The shell of an egg has thousands of tiny pores passing through it so that oxygen can pass inward from the air into the interior of the egg, and the carbon dioxide resulting from metabolism can pass outward from the egg and into the air. If the carbon dioxide did not escape, it would acidify the interior of the egg and kill the living cells. Finally, living tissues are mostly water. The egg’s water reservoir is the egg white, which constitutes about 60% of the weight of the egg and is composed of almost 90% water.

Immediately under the shell is the egg’s outer membrane, a tough layer that restricts the passage of gases and the evaporation of water across the shell and also helps prevent the entry of bacteria. This protects the developing duckling from infection. There is another layer, the vitelline membrane, that separates the yolk from the white. This forms the final protective barrier against bacterial infection. Blood vessels and later other tissues grow out of the embryo and over the surface of the yolk. The blood vessels make possible the absorption of nutrients from the yolk—an absorption that occurs on a large scale. By the time the duckling is ready to hatch, virtually all of the yolk has been consumed. What little remains is surrounded by the walls of the small intestine and taken into the body, serving as reserve food at hatching time.

If it took Mama Duck two weeks to lay her eggs, would the ducklings similarly emerge over a period of two weeks? Not at all. Rather, they would emerge over a period of just a few hours. How is this possible? The first-laid eggs were exposed to cool temperatures for a much longer time than were the more recently laid ones. This cooling slowed development, more for the older eggs and less for the recently-laid ones, bringing their hatching time closer together.

This, however, is only one of the mechanisms leading to synchronous hatching. Here is another. Duck siblings, like the young of many birds, communicate with each other while still in the egg! They make clicking sounds, which are transmitted outward through the shell of an emitting bird and inward across the shell of a listening bird where they are detected by the freshly developed auditory system. These sounds spread throughout the clutch of developing eggs, helping to synchronize the movements that break the shell and allow each fledgling to emerge. The clicks even seem to be able to influence the rate at which the young develop prior to emergence.

Would Yvonne and I get to see the ducklings hatch? Sadly, we did not. For the several days around the anticipated hatching time, we had previously arranged to visit our older daughter, Rachel, and spend some time with her and her Montessori School students in Kenosha, Wisconsin. The ducklings hatched on May 26th while we were away. Our good neighbors, however, kept watch on our behalf and managed to capture one picture. 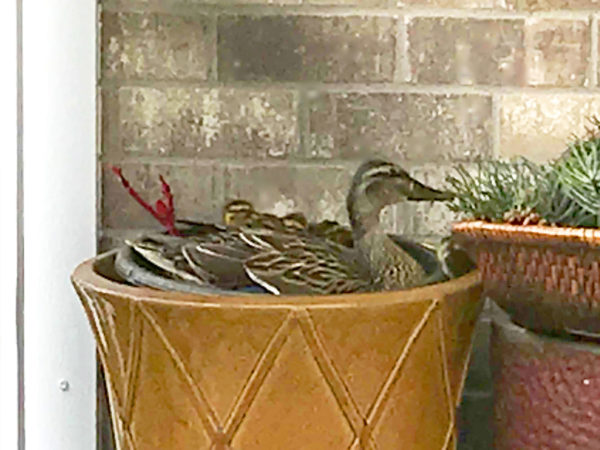 You can see Mama Duck and the heads of three of her ducklings, still in the nest. Twenty minutes later they were all gone, presumably walking down to the pond just below our house. 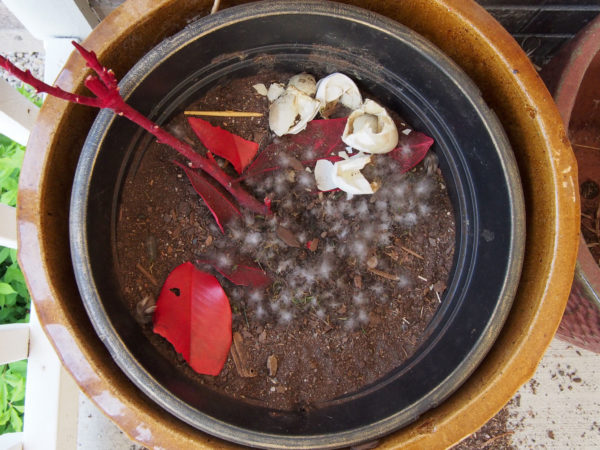 When we came home the next day, the nest was empty. Mama duck and her ducklings were gone forever. 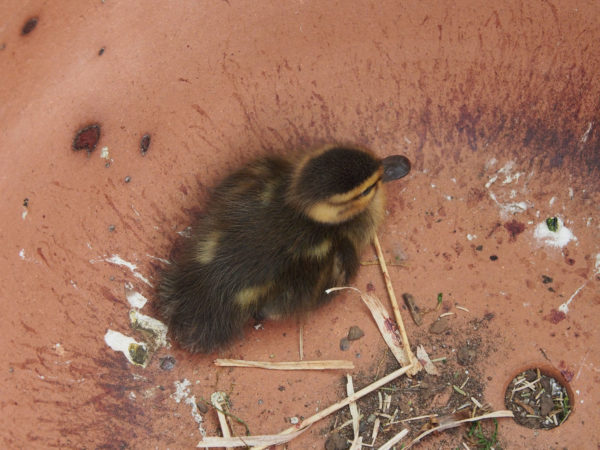 Looking more closely, however, revealed a surprise. There was a second planting pot right by the nesting pot (you can barely see it along the right edge of the previous photograph), and inside this empty pot was a single duckling! 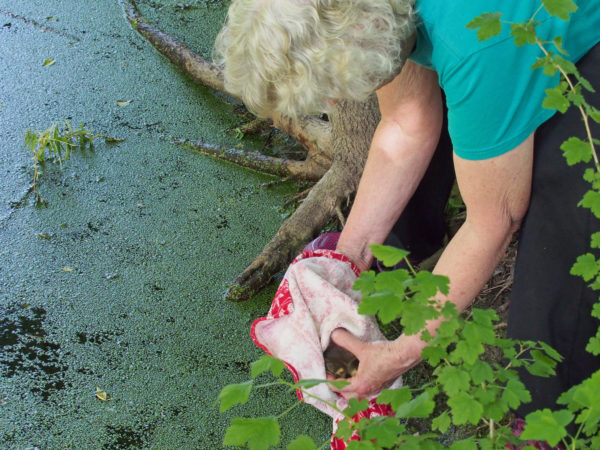 Solitary ducklings, without their mother’s protection, do not have much of a chance for survival in the face of predators. Nevertheless, Yvonne wrapped the duckling in a kitchen towel to keep it as calm as possible, and we took it down to the nearby pond and released it. 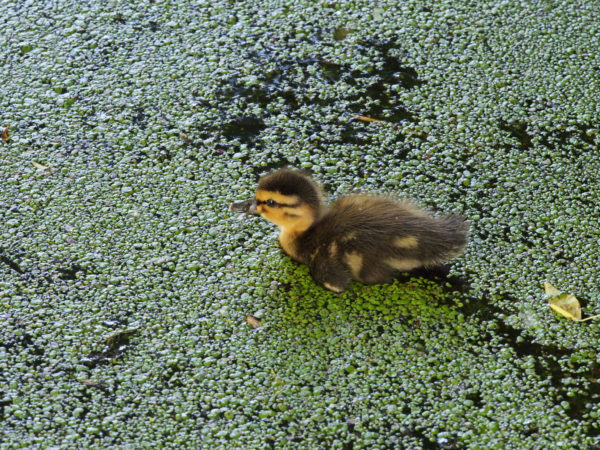 It swam away immediately, making its way readily through the aptly-named duckweed.

It had been stranded in its empty pot for at least 24 hours, so it was very thirsty and probably also hungry. In this video (https://www.youtube.com/watch?v=-VI2AJ9q_pU) you can see it swimming confidently, dipping its bill into the water at intervals, and shaking its head vigorously as it takes in water and nourishment.

It is exciting to observe new life being brought into the world right on your doorstep! It is also a vivid reminder of the whole web of life. The sun plays its role, water is essential, genes are at work to guide the cells of the developing duckling, energy is required, gases have to be exchanged, predation is an ever-present danger. Nothing on our Earth develops, is born, and dies in isolation. Everything is embedded in the entire Earth system.

The Earth itself arose from and continues to be a part of the entire Cosmos.

Truly we are not alone!

28 responses to “New Life on Our Doorstep”