Lanterns of the Western Woods

Walking in the western woods in springtime, from Alaska to California, you may notice flashes of brilliant yellow coming from what look like big flowers. What you are seeing is Lysichiton americanum, commonly known as swamp lantern or western skunk cabbage. Both names for these spectacular plants are highly appropriate. Erect above the saturated soil or standing water, the flowering parts of Lysichiton beam out their yellowness, truly like lanterns in the swamp. And from a closer distance, their slightly acrid odor is unmistakable. Though neither intense nor excessively unpleasant, the odor is vaguely reminiscent of skunk.

Readers familiar with the woods of eastern North America will remember that plants known as skunk cabbages are present there as well. These plants, however, are not the same as the western ones. Technically called Symplocarpus foetidus after their fetid smell, these purple-striped plants are classified by plant systematists in the same family (the Araceae) as is the yellow Lysichiton, but the two have no more than a cousinly relationship. Only 10 species of Araceae occur in all of North America, so in our woods they are unusual organisms. The rest of the family’s 2,000 or more species are tropical, and include the familiar hothouse plant Anthurium, whose brilliant flowering parts are often colored deep red, and the philodendron, which is commonly used as a sturdy house plant.

Let’s ask first, what is it that prompts systematists to classify the two different skunk cabbages, as well as anthuriums, philodendrons, Jacks-in-the-pulpit, and a variety of other, mostly tropical plants into a single family? This seemingly abstract question will lead us directly into the biology of one of the wonders of our woods.

Look first at the picture below. On the right are the lantern’s green leaves, photosynthetic as usual. On the left, what may appear at first to be a single yellow petal is not that at all. Rather, it is a modified leaf called a spathe. And the rather phallic structure partially enclosed by the spathe may look superficially like a flower, but that is deceptive as well. Rather than being a single flower, it is a mass of tiny, individual flowers, sometimes as many as a thousand, packed tightly into a large assembly called the spadix. For convenience, botanists refer to any organized assemblage of flowers as an inflorescence. Thus, a spadix is a particular kind of inflorescence. All 2,000 species of the family Araceae (https://en.wikipedia.org/wiki/Araceae) are characterized by spadices associated with spathes. DNA studies confirm that all these species are evolutionarily related. 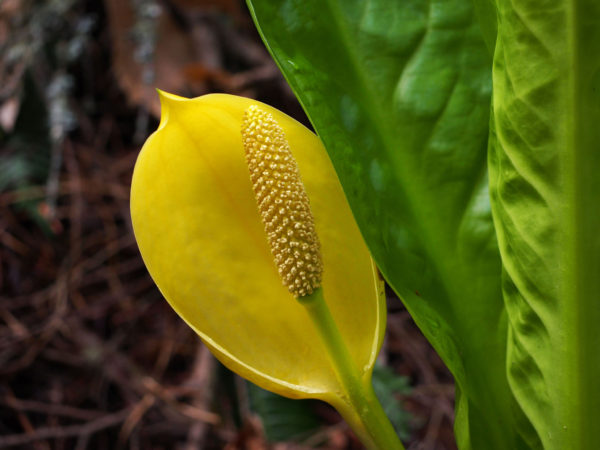 So now we know that our western swamp lanterns, a.k.a. skunk cabbages, are members of a large and distinctive family of plants, the Araceae, whose distribution is primarily in the tropics; that they are characterized by the possession of a spadix and spathe, two structures related to reproduction; and that they have both a pronounced color and a pronounced odor. How do these facts fit together to provide a picture of their biology?

The spathe serves at least two functions. In the spring, the new swamp lantern plants emerge from seeds or from overwintering underground stems (rhizomes). Either way, they have to force their way up through the soil. In this, the spathe serves to mechanically protect the reproductively vital spadix. Upon emergence, the brilliant yellow color comes into play. It is very noticeable not only to us humans, who have played no role in the evolution of swamp lanterns, but also to potentially pollinating insects who are often attracted to the bright colors of flowers. 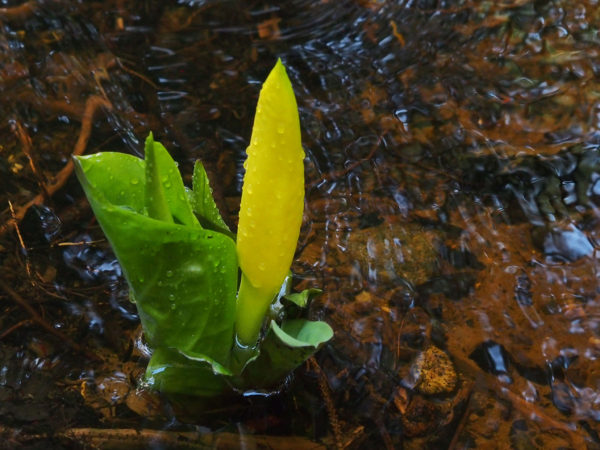 But now we have a puzzle. Lysichiton is not only a brilliant swamp lantern, it is also a skunk cabbage—it has a distinctive odor in addition to its distinctive color. Like colors, the odors of flowers most often serve to attract pollinators. Odors that we humans consider to be rank are most often associated with pollination by beetles and certain types of flies. With two potential attractants—color and odor—which do the pollinators pay attention to, and how do we find out?

In the case of the western swamp lantern/skunk cabbage we are fortunate, because we have an excellent experimental study to go on. I want to use this opportunity to show you how biologists find things out via often simple but carefully thought-out steps. Here is how our authors, Olle Pellmyr and Joseph Patt, working at the University of Washington, proceeded back in 1985.

Pellmyr and Patt conducted their modest but revealing study over a period of about three weeks in the spring, covering the entire annual fertile period of Lysichiton, at three different sites in the general vicinity of Seattle. They observed what insect species came to the inflorescences, and found that virtually all were so-called rove beetles of the species Pelecomalium testaceum in the family Staphylinidae, a very large and diverse family of some 63,000 species (https://en.wikipedia.org/wiki/Rove_beetle). From 15 to 64% of inflorescences at the three sites had beetles on them, which is a very high percentage. Further, when a sample of the beetles was captured and killed, the contents of their intestines proved to be almost exclusively the pollen of Lysichiton. In the picture below, taken at the Earth Sanctuary (a wonderful private nature preserve on Whidbey Island) we see beetles captured in the act of feeding on pollen. 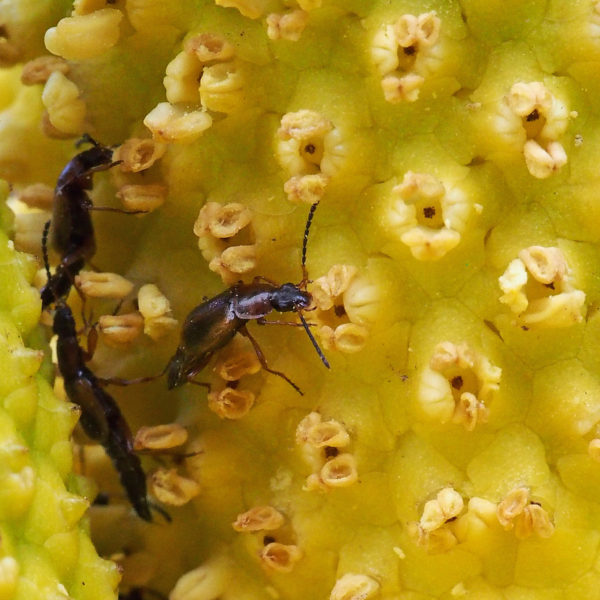 Conclusions from the field studies: (1) Pelecomalium testaceum is by far the dominant pollinator of Lysichiton americanum. (2) The plant’s pollen can serve as by far the dominant source of energy-providing food for the beetle during the pollination season. The two are well matched to each other!

However, biology is complicated and an important part of the relationship of Pelecomalium testaceum and Lysichiton was left unexamined by Pellmyr and Patt. It is possible that the plant-insect relationship is not exclusive, and that P. testaceum also visits flowers other than Lysichiton and gorges on their pollen. The only way we could find out would be to sample the flowers of a vast number of other species, a huge and potentially unrewarding task that our authors did not attempt.

Pellmyr and Patt also worked in the greenhouse of the University of Washington, a place I knew well and which is now being replaced by a much more extensive and modern facility. Here they conducted some very simple behavioral experiments, including:

Knowing that they feed heavily on the pollen of the swamp lantern helps explain why Pelecomalium beetles have evolved so as to be attracted to smelly, yellow structures – they get food as a reward. But there is more to the story than that. Swamp lanterns attract both male and female beetles, and both sexes forage for the pollen. In this way they encounter one another, and the spadix serves as a courtship and mating arena. In the picture below, also taken at Earth Sanctuary, you can see the beetles paired for mating, the smaller males atop the larger females. The white spots on their bodies are pollen grains that the beetles have the potential to carry to female flowers. 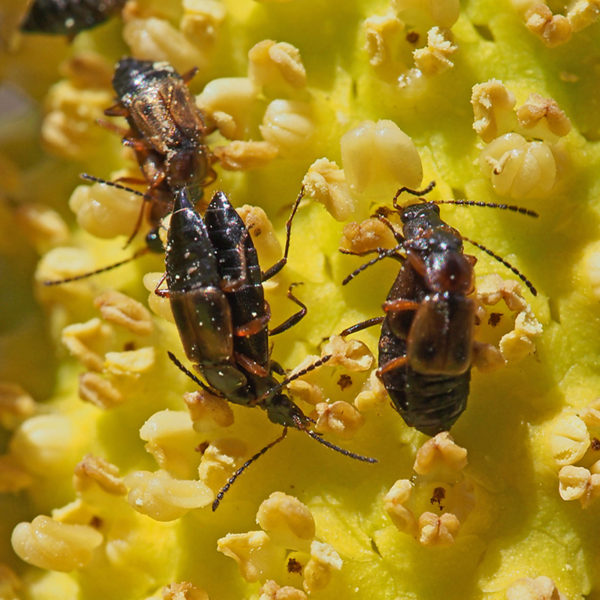 Thus, the beetles benefit from visiting swamp lantern flowers in not one but two ways: in the pollen they find a nutritious, protein-rich food, and on the surface of the spadix they find a mate. What could be better, especially for a creature that lives as an adult for only a few weeks?

We have now come to the end of our story, a story we know only due to the curiosity and imaginative investigation of a handful of biologists. I hope that when you next encounter a swamp lantern/skunk cabbage, you will recognize it as a friend to be appreciated. It is but one of over two thousand species in its family, the overwhelming majority of which are tropical. It attracts its beetle pollinators by the combination of its distinctive odor and its characteristic brightness (or its yellow color, or both, we really don’t know!). The beetles themselves benefit from nutritious pollen and from finding mates. And we humans are able to appreciate one of nature’s manifold wonders, living out its life before our very eyes. Contemplate this gift as you enjoy walking through the spring woods!

17 responses to “Lanterns of the Western Woods”