The Dynamic Control of Colors

Autumn is a season of transition and it can be spectacular. Just a few weeks ago, the brilliant leaves we all love so much were everywhere, like at this jewel-like pond on the North Shore of Lake Superior. 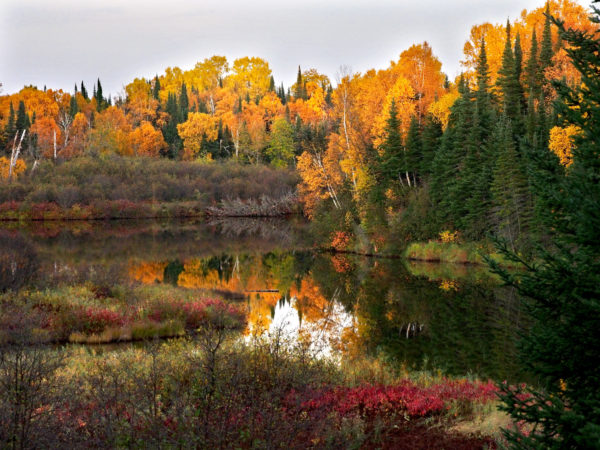 Or here in the woods of the Eastman Nature Center near our house on the outskirts of Minneapolis. 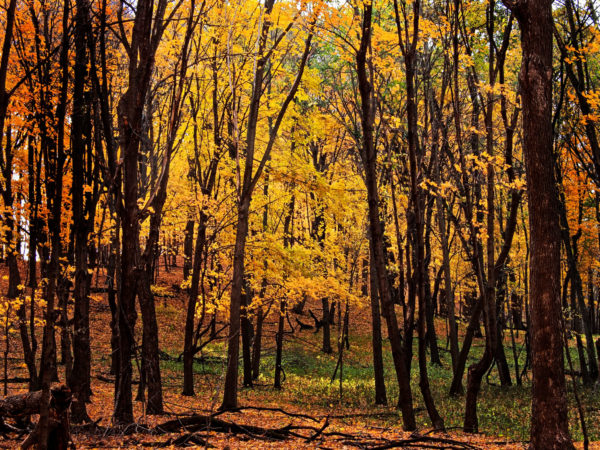 The Canada geese have arrived from further north. 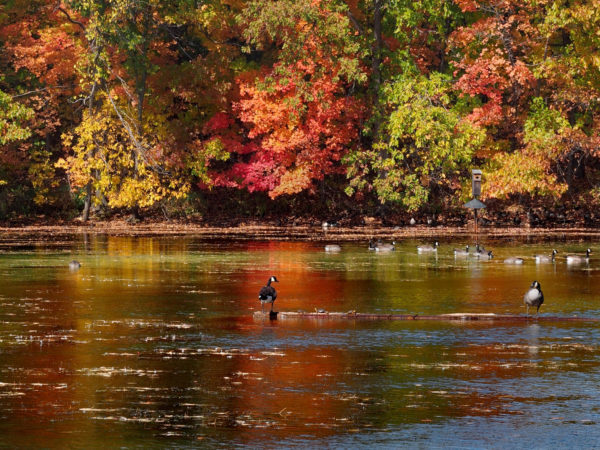 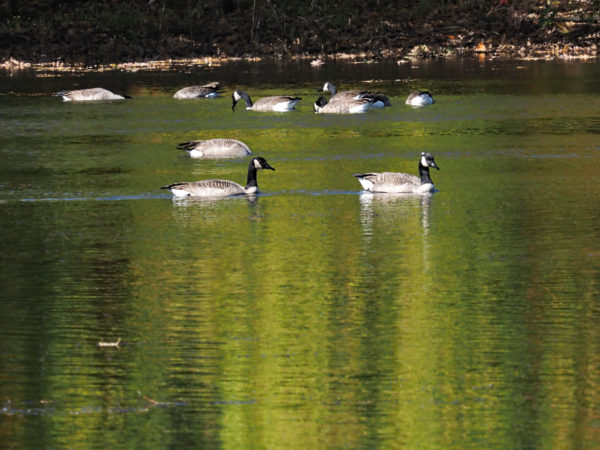 More than anything, autumn is the season of brilliant colors, and most of us are immediately drawn to them. However, as much as we relish them, the colors can also prompt us to ponder. In one of the earliest posts on Nature’s Depths, “Our Brightly Colored World” (November 29, 2015), almost exactly five years ago, we asked, where do colors come from and how do we get to see them? Let’s look at that question again now, and then take it further.

Here is a basic explanation of why pigment molecules lend color to the materials of which they are a part. When light strikes a molecule, it interacts with it. The nature of that interaction depends jointly on the structure of the molecule and the wavelength of the light.

In between ultraviolet and infrared, we get color. For example, chlorophyll molecules make leaves look green. This is because the middle wavelengths of light, the ones that we perceive as green, pass though the chlorophyll and remain available to our eyes, whereas those in the red and blue regions of the spectrum are absorbed. Light, of course, is a form of energy, so the energy carried by the absorbed red and blue wavelengths is transferred to the chlorophyll molecules. These molecules are linked with a large number of other molecules, and the whole array, ultimately, uses the absorbed solar energy to drive the biosynthesis of sugar. The energy of nuclear reactions in the Sun, reaching the Earth in the form of light, is thus used to drive the synthesis of sugar molecules and is stored in them. These sugar molecules support virtually all of life on Earth. And how do we ourselves get to recognize that leaves are green and not blue? Check out the post “Seeing Colors” (December 13, 2015) and find out!

This basic process applies to all pigment molecules. Blue pigments transmit blue light but absorb red, green, and yellow. Red pigments transmit red wavelengths but absorb yellow, green, and blue. And so forth. The unabsorbed wavelengths reach our eyes either directly (as when pigment molecules are in a clear solution) or by reflection (as when they are painted on a canvas or embedded in a solid material.

By this sequence of steps, a cell’s genes give that cell its specific pigments. This affects the coloration of an animal, or a flower, or a leaf, and thereby it also affects that life form’s place in the ecosystem. Photosynthesis, pollination, mate attraction, camouflage, and many other functions are affected by color. It’s an exhilarating set of interconnections, isn’t it—from genes to pigments to interaction with sunlight and on to survival, reproduction, and, in the long run, evolution!

There is, however, a conundrum.

The golden and red leaves we love so much used to be green. This means that the same cells, with the same genes, are producing a different set of pigments in the fall than they did in the summer (see “Flaming Forests”  posted on December 11, 2016). We can also readily see that not all the cells of an organism are the same color at any one time. Nevertheless, their genetic makeup hasn’t changed from that of the fertilized egg from which the organism developed. Given the sequence of steps we just went through, how can this be? If all cells in an organism carry the same genes, the genes encode enzymes, the enzymes drive specific biochemical reactions, those specific reactions yield specific pigment molecules, and specific pigments yield specific colors, how can one cell of an organism produce different colors at different times? Or be of a different color than another cell of the same organism? We’ll use monarch butterflies (Danaus plexippus, Family Nymphalidae, Sub-Family Danaidae) to approach this question. 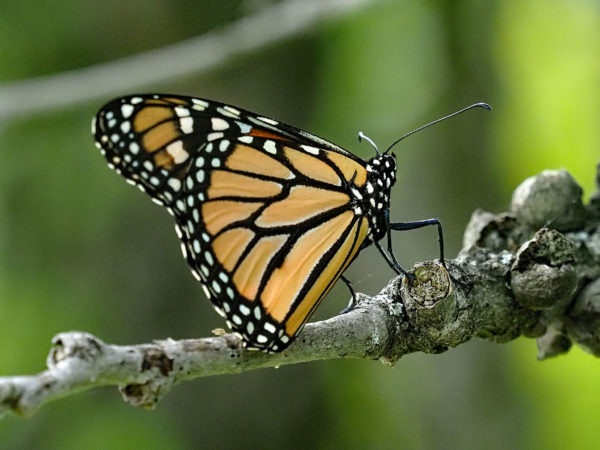 In the post “The Magic of Butterfly Wings” (June 4, 2017) we noted that the colors of butterfly wings are the properties of tiny, individual scales produced by single cells. Below are two pictures of the edge of a monarch’s wing to show this. In the first picture you can see that the surface of the wing is highly structured, not smooth the way it looks to the naked eye, even from quite close. The extremely regular rows running left-right across the orange, black and white areas are rows of scales. 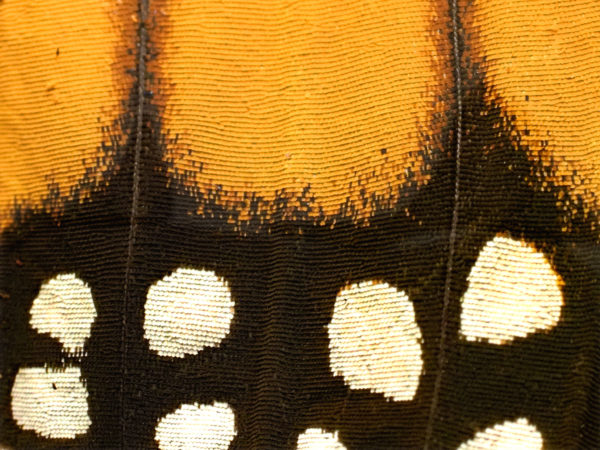 Individual scales are more evident in the next picture, taken in the same location but at higher magnification. The white patch in the lower left shows the scales most clearly. Along the lower margin of each scale you can just detect the stalk on which it is set. There is also a single detached scale, orange and oriented diagonally, slightly to left of center. 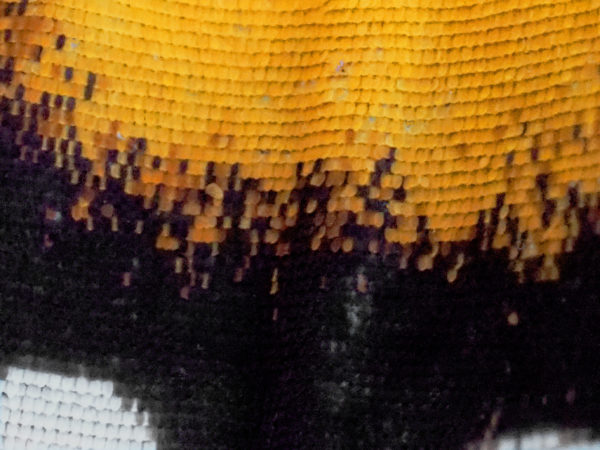 Neighboring scales can be of the same color, but they can also be of different colors. This is our question. How can you have two scales side by side, each produced by a single cell, but one of them black and the other orange? How does a developing butterfly arrange to deposit exclusively black pigment in one scale and exclusively orange pigment in its neighbor? How might we explain this, given that all of the cells of an individual butterfly have the same genes?

The basic answer is gene regulation.

The overall framework of the explanation for the “same genes-different colors conundrum” is this: the fact that a gene is present in a given cell does not automatically mean that it is active. Genes are designed—have evolved to be—regulated. They can be maximally turned on, or completely turned off, or can function at some intermediate level of activity. Portions of a gene’s DNA, or segments of the DNA immediately adjacent to the gene itself, or proteins associated with the gene have an architecture that invites the binding of molecules whose function is to regulate that gene’s activity. The activity of any given gene can be adjusted depending on circumstances. In this way a cell can, for example, respond to hormones and its functioning can be tied to maturation or to a changing environment as we have seen in the case of leaves ( “Flaming Forests”). A cell’s genes, and hence the cell itself, can also respond to molecules that function in processes that recruit cells into structures and patterns, such as the beautiful patterns on butterfly wings.

Here is an example of how this works. In the pair of pictures just below, the upper one is of a purplish fritillary (Boloria chariclea, Family Nymphalidae) taken on Hurricane Ridge in Olympic National Park. The lower picture is of a monarch taken at the Crow-Hassan Nature Reserve in Minnesota. These butterflies are evolutionarily related and belong to the same family, Family Nymphalidae. 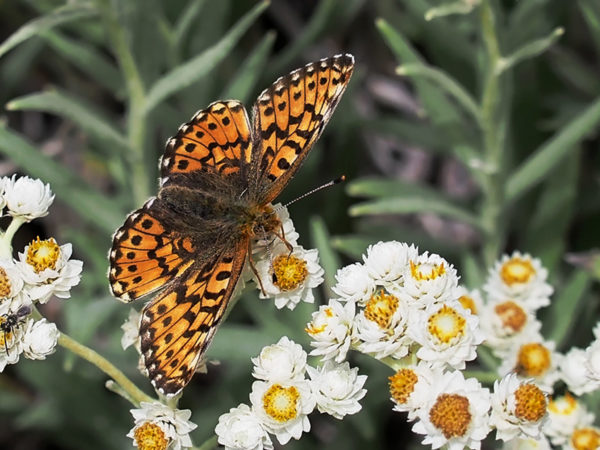 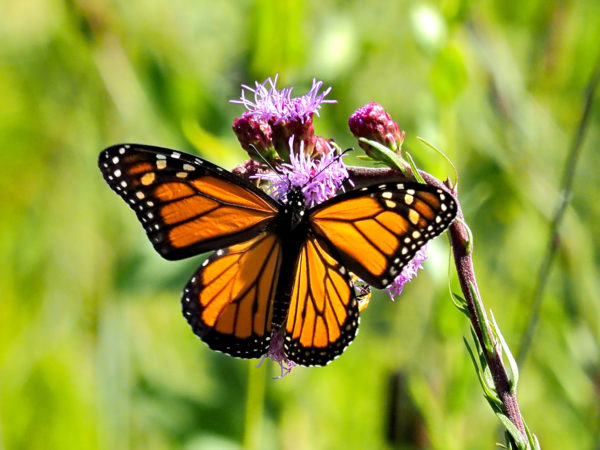 The color palette of their wings is very similar. Given this similarity, as well as the overall relatedness of the two species, the genes that govern the synthesis of pigments by the scale cells of their wings are probably the same. However, the mechanisms that generate patterns on the wings give conspicuously different results. A reasonable hypothesis would be that the genes governing the pattern-generating mechanisms are in some way different in fritillaries and in monarchs and the differences reflect the operation of evolution.

Here are two more examples. The pine white (Neophasia menapia, Family Pieridae) in the upper of the next two pictures and the red admiral (Vanessa atalanta, once again Family Nymphalidae) in the lower one differ both from the fritillary and from the monarch. They also differ markedly from each other. 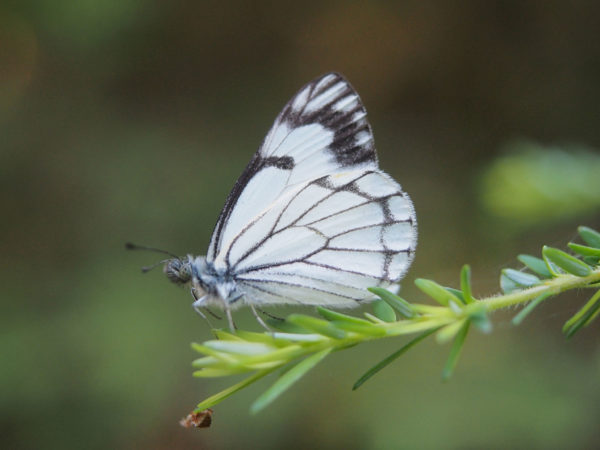 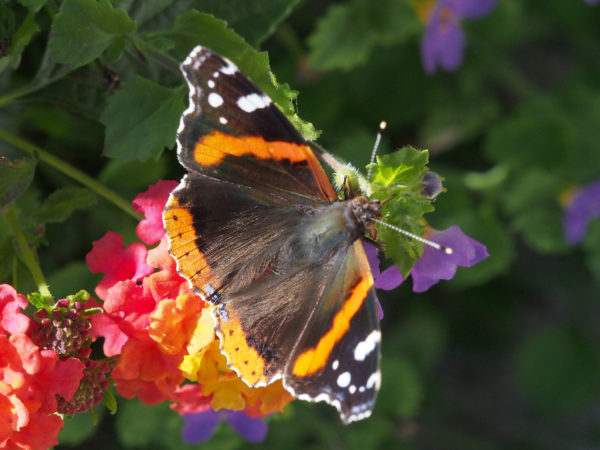 All four species show black and white on their wings and three out of the four also produce orange. Therefore, the genes required for the synthesis of wing pigments are probably largely the same across these species. The patterns, however, differ in many ways, so we can expect differences in the genes that guide the development of patterns: the genes that encode the enzymes that construct the molecules that participate in generating patterns are presumably different in functionally important ways across all four species.

THE PARABLE OF THE BLACK SWALLOWTAIL 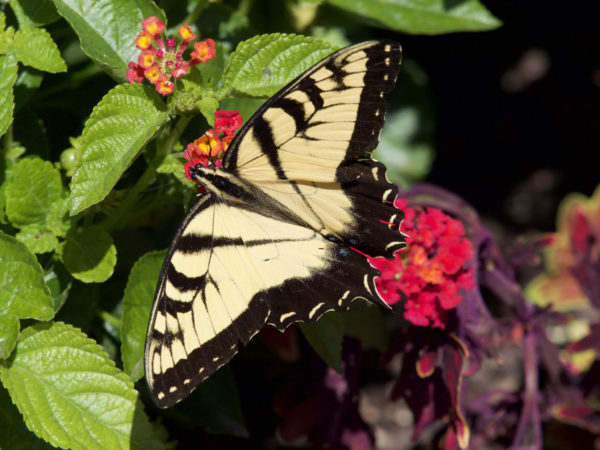 A female would look similar, except she would have considerably more iridescent blue on her hind wings. But there is another version of the female of this species, a black version or morph. Below is a picture of such a female, taken while she was feeding just a few feet away from the male shown above. It was late in the summer and she’d become rather battered, but the message is clear. Whereas the wings of many eastern tiger females are just like the wings of the males, golden with four black stripes, there are also many females whose wings are black all over except for the iridescent blue areas at the back and some small spots. This condition is referred to as melanism, because the black color is due to melanin. Melanin is a widely distributed group of closely related pigments that in mammals (including humans) cause dark coloration in hair, skin and behind the retina of the eye, and also tanning in sunlight. Melanins occur in a huge variety of organisms including even plants. We saw another example early in this post—the blacks and grays of the feathers of the Canada geese currently paddling on our lakes. 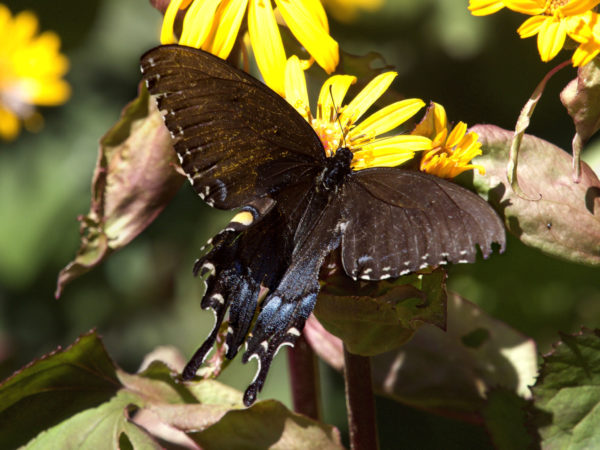 Biologists believe that the mechanism that leads to the presence of two such different morphs within a single species is also gene regulation. Here is part of the evidence.

This is not the whole story by any means. It is, however, a great example of how the regulation (in this case the shutting down) of a single gene—a gene that is still present and could in principle be turned on again—can play a central role in the generation of a visible pattern.

PULLING IT ALL TOGETHER

Today we have been on a journey that is more complex than usual, so let us review the material we have gone over. The basic ideas are these:

Isn’t Nature amazing! When you go out to savor it, consider saying thank you for living in a world, and indeed a universe, that permits the evolution of molecular mechanisms that underlie not only life itself but also the complexity, variety and beauty of all living things, whether leaves or butterflies or human beings.

10 responses to “The Dynamic Control of Colors”